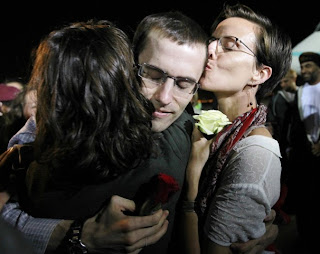 I'm glad they indicated which one was Shane, since otherwise I would have been at a loss. I guess it's true that some couples start to look like each other over time.

Anyway, this remark in the WaPo story on the release of the two U.S. hikers from Iran is what prompts me to comment on Mr. Bauer:

“Two years in prison is too long,” Bauer said. He expressed hope that Wednesday’s release would lead to “freedom for political prisoners in America and Iran.”

How's that again? Who are these political prisoners in America? Later in the story we get a clue:

News of the release was welcomed Wednesday by officials from the Council on American-Islamic Relations, who were part of a delegation of U.S. religious leaders and American Muslims who traveled to Iran to ask that the hikers be allowed to leave.

“We believe the efforts of the recent interfaith delegation to Iran offer a positive example of bridge-building initiatives that may be undertaken to help promote mutual understanding and cooperation between nations,” CAIR National Executive Director Nihad Awad said in a statement. “We hope our government will now address the issue of Iranian citizens detained in the United States with the same spirit of compassion.”

Apparently these unnamed detainees are persons convicted of illegally exporting U.S. military equipment and restricted items to Iran, like this guy, plus a few who have gone missing in other countries. The first group belongs in prison, and the second group is not under our control.

Maybe Shane was suffering from some kind of late onset Stockholm Syndrome when he made that remark about political prisoners. Or maybe he's just a jerk.

Shane's freedom was purchased by a $1 million bail payment sent by Sultan Qaboos bin Said of Oman to the account of the Iranian judiciary. Is it too late for the Sultan to return Shane and get his money back?
Posted by TSB at 1:07 PM

Hey TSB! The invisible guy won the
Florida "Debate" ! They must have called on him once? gwb
http://www.foxnews.com/opinion/2011/09/22/who-won-debate/

Ya Gotta Love it TSB! Fox runs a who won the debate poll and when the wrong guy wins they pull it from the website! I was switching from the Yankees game and it looked like he only got about 2% of the air time so maybe Fox thought the results were rigged! lol gwb
http://www.infowars.com/fox-news-poll-ron-paul-wins-orlando-debate/

TSB: I noticed an absence of ANY enthusiasm for Obama's UN Speech by the "International Community". Pepe Escobar thought this remark re: Libya was the moneyline:"no doubt: the tide of war is receding."

Neo-Orwellian spin doctors could hardly top him on this one. Referring to the North Atlantic Treaty Organization's operation of bombing Libya into democracy, Obama stressed, "This is how the international community is supposed to work." gwb

TSB: Erdogan is also buying the M-Q9? Reaper to blast those PKK terrorists. I like that guy! gwb

Turkey and Reapers? Sure, so long as Congress approves the sale, go for it. It's a target-rich environment.