Over One Million Served 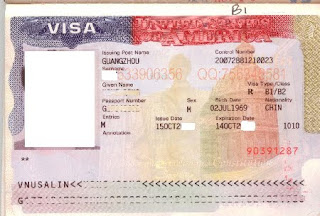 One million visas, that is, served up this year to Chinese applicants. Here's the
press release:

On December 14 at the U.S. Embassy in Beijing, Ambassador Gary Locke presented the one millionth visa adjudicated in China this year. With the help of additional personnel and process improvements, Mission China has also successfully reduced the average wait time for a visa interview appointment to less than one week.

Since taking up his post in China, Ambassador Locke has emphasized the importance of travel and trade between the two nations. According to the Department of Commerce, in 2010, more than 800,000 Chinese visitors contributed $5 billion to the U.S. economy.

More Chinese visitors will create more jobs and opportunities in the U.S. travel and tourism industries. In addition to ongoing efforts to keep visa wait times low, the United States is encouraging the Chinese government to extend visa reciprocity to allow both U.S. and Chinese travelers longer validity visas, which is in the interests of both nations.

Next year's goal is to adjudicate more than 2 million visas in China (see this interview).
Posted by TSB at 12:57 PM

Great post TSB! We need more diplomacy and visas and less arms racing. Only 55 people? Why not take about 200 from that Baghdad one and send them to China? Then we could get to 4 million visas in the next year! You don't need to speak Chinese to work in China do you? And how long are the visas now? gwb

GWB, you do need to speak Mandarin to do visa work in China, so there is a limited pool of people qalified to work the consular line there. I forget the length of the tourist visa, but it is linked to the length of the visas the ChiComs issue to our tourists, and I saw that we are negotiating a mutual increase in that length.

Everyone I know that has traveled to China can hardly wait to go back. It is amazing to think that only one in 60 travelers to the US come from China. There must be a gazillion english speaking Chinese?
gwb

I've never been to China (in fact, I have never been anywhere in East Asia, the only region of the world I have never traveled in), and I suspect it's not my cup of tea. But the Chinese sure seem to like coming here. I'd like to know the rate at which they return, because I'm pretty sure it is less than 100 percent.

Does he mean adjudicate or approve? Clearly Locke has an agenda and it ain't stopping visa overstays.

Clearly he has an ethnic agenda and given the opposition of the Regime to Voter ID, a lot of Locke's fellow Chinese will be voting for Obama soon.

All comes to mind the shennanagins by the Clinton Regime and PLA generals sleeping in the Lincoln bedroom.

Locke means one million approved; he issued the millionth visa himself. They reached the one million adjudicated mark back in the spring.

The Brazilian visitors are okay by me, but I agree there seems to be an overstay problem with the Chinese.

On the Clinton years, didn't VP Al Gore have a "Project 2000" to expedient naturalizations for Hispanics before the 2000 election?

Ever been to Massachusetts? There is a similar problem with Brazilians.

I don't get to Massachusetts. I guess the Brazilians must be attracted to all the Portuguese spoken in New England. Too bad, but they're probably a big step up from the Salvadoreans in my neighborhood.