Benghazi - Not The Worst Place On The Planet 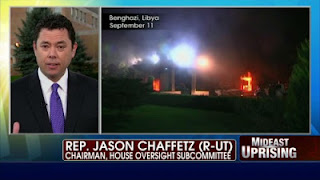 Representative Jason Chaffetz, Chairman of the Oversight Subcommittee on National Security, Homeland Defense, and Foreign Operations, has been hitting the news shows hard today, giving us a preview of tomorrow's committee hearing on the security failures of Benghazi.

Rep. Chaffetz is evidently a hands-on kind of investigator, since he is just back from a fact-finding trip to Libya. He didn't get to Benghazi during that trip, however, as he related to Andrea Mitchell, he did visit the U.S. Embassy in Tripoli "for most of the day on Saturday." So, expect him to bring a bulging overloaded suitcase full o' facts to tomorrow's hearing.

I won't take issue with his facts. But I do question one thing he's been saying. In several interviews today, such as this one, he used the same line to emphasize how uniquely dangerous the environment in Benghazi was.


“Twice in the six-month lead-up to this attack and death of the four Americans — twice the British ambassador had an assassination attempt and twice our facility in Benghazi was bombed! No other place on the planet had that happen!”


Two attacks? Only two? Rep. Chaffetz should book his next fact-finding trip for Pakistan, and especially the U.S. Consulate in Peshawar, if he wants to see U.S. diplomatic facilities that have experienced multiple attacks.

-- It was on September 3, barely one month ago, that four Consulate employees in Peshawar were very nearly killed by a suicide bomber who drove his bomb-laden vehicle into theirs. How soon we forget.

-- In May of 2011, two other Peshawar employees survived a roadside bombing that targeted their vehicle.

-- In February of 2010, three U.S. military personnel were killed by a suicide bomber at a girls school in in Khyber Pakhtunkhwa province outside Peshawar.

-- In April of 2010, the Consulate office compound in Peshawar was attacked by a six-man Taliban team that employed RPGs, small arms, grenades, explosive charges, and three bomb-laden vehicles. That's three bombs in a single attack. And it happened on this planet.

-- In August of 2008, the Consul General in Peshawar survived an ambush on her vehicle.

And there is much more. In fact, almost every Pakistani government or military target in Peshawar worth attacking has been destroyed. For a summary of some recent attacks see this.

I won't even get started on the full history of attacks against the U.S. Consulate in Karachi. Suffice it to say that there were suicide bomber attacks against it in 2002 and 2006, plus a failed bomb attack in 2004.

None of this is to say that Benghazi is not a very dangerous place. However, some context is called for. We have even worse threat environments, and we haven't closed the U.S. missions in those places.

I assume our national authorities have determined that in those places, as in Bengahzi, our missions are serving vital interests that outweigh the danger of  keeping them in operation.

TSB! Dennis the Menace strikes again! 10,000 to 20,000 shoulder fired missiles still on the loose in Libya? I'd like to see the committee call the guy who decided Libya needed those in the first place. gwb

Kucinich went off on a rant, huh? Those are Qaddafi's old MANPADs, so he isn't available, but the Russians who sold him the missiles are around. Let's call them!

TSB: Very interesting to see the witnesses for STATE. I was rooting for the whistle blowers but it was fun to watch the indignant old pro's trying to cover for Hillary and Susan Rice. gwb

Several members of this committe (including Chaffetz, I believe) have visited Peshawar. I can't say whether Consulate security was on the agenda, but I'm sure they noticed some security measures.

TSB: When I saw the ceremony at Dover I didn't like it one bit. Mothers deserve better than this at what amounts to their only kid's funeral. gwb

Thanks for your comment. I agree - Benghazi met that criteria. That gets lost in all the back-and-forth about threats and security measures. Either the national interest outweighed the risk to people, or it did not. At Kennedy's level they make those decisions. Hanging the DS/IP Director out to dry for her management of her program resources is to miss the larger point.

TSB: Diplopundit printed Kucinich's rant today. It's only 1 paragraph. I thought it was the best statement yet on Benghazi and the funding problem for diplomatic security. gwb

"Either the national interest outweighed the risk to people, or it did not" Surely TSB you cannot expect such reasoning from those who live in the land of "Nuance"

Well, we can have our expectations, anyway. Maybe they'll work out.

TSB: Speaking of worst places on the planet a lot of them are where the DOD has done the worsing! gwb

http://www.atimes.com/atimes/Japan/NJ12Dh01.html
You would think after 40 or 50 yrs a competent organization would at least figure out that 55 gallon drums eventually leak.