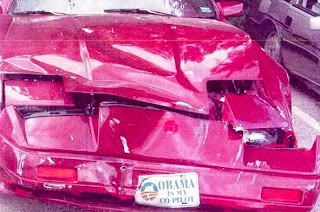 What the Dems have been singing for the last 6 years:
https://www.youtube.com/watch?v=iJb7cBfrxbo

I dedicate this one to Obama and the Democrats:
https://www.youtube.com/watch?v=HAtYCDKWrvA

Atta Boy James!! I just got some no slip shoes yesterday.. on sale! gwb

I am rather fond of the above car picture.

TSB: Combined with the above I nominate
John McCain (new head of Armed Services) for most dangerous man of 2015. gwb

TSB: The French farmers are giving Parisians free apples, pears and potatoes cause they can't sell em.. also hay and cow manure! Reminds me of the 30's. gwb (Obama pretty popular compared to this.)

TSB: When you look at the damage US sanctions have done to the Russkies it is pretty extensive and personal. But when you look at what they are prepared to do to us it looks like a really bad idea. gwb

GWB: Free apples and pears sound good; manure, not so much. What's their offer - a bag of fruit for every bucket of manure you carry away?

TSB: I was impressed by the pictures. It seems they have been protected from outside competition forever and now that's broken down and even a 'socialist' can't save them. Looks like the wreck of the EU is getting close.
gwb

Raphel was instrumental in orchestrating the State Department's opening of diplomatic relations with the Taliban shortly after its takeover of Kabul.[12]:300 A senior Unocal executive went so far as to comment that the pipeline project would be far easier to implement with the Taliban in control (snip)wikipedia.gwb

TSB: That is a really interesting story. Notice that back in the 90's 'Afpak' policy was all about helping the oil companies and Saudi Arabia get pipelines.

Thanks TSB! That was interesting. gwb

TSB: Speaking of someone getting the boot: Yemen's President Hadi forced from leadership of party. (reuters)

All those endorsements from foreign leaders don't seem to be helping. gwb

Secret Service canine handler was on a personal phone call.. TSB: Probably his wife reminding him to get more dog food! gwb