HDR22@ClintonEmail.com Has Some Questions to Answer 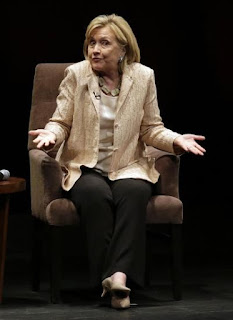 There is an excellent short article about Hillary Clinton's security violation troubles at the Daily Beast: The Spy Satellite Secrets in Hillary’s Emails. The author is a former National Security Agency Counterintelligence Officer, so he actually brings expert knowledge to the subject, unlike every other commentator that I've seen so far. (You can follow him on Twitter at @20committee)

Please read the whole thing, but it boils down to this:


What, then, does all this mean for Hillary Clinton? There is no doubt that she, or someone on her State Department staff, violated federal law by putting TOP SECRET//SI information on an unclassified system. That it was Hillary’s private, offsite server makes the case even worse from a security viewpoint.


Exactly. Someone, and almost certainly that was someone other than Hillary, committed "spillage" of information from a highly classified government information system into an unclassified government information system, and from there the 'spill' was forwarded - maybe by the same someone, or maybe by someone else - outside of the government firewall and onto Hillary's private and unsecured e-mail server. Hillary, as I said, almost certainly was merely the recipient of that spill. But nevertheless, her use of a private server for official communications created the vulnerability that makes this spill way worst than if it had been contained inside government networks.

The author asks these questions:


There’s still a lot we don’t know about Hillary Clinton’s Emailgate. Exactly how many emails contained TOP SECRET//SI information is unclear. We may never know since thousands of emails were already destroyed by Clinton. Who exactly placed the classified information in emails—it may not have been Hillary Clinton—and how did they access the information in the first place? How many of her staffers at Foggy Bottom were also using her personal server?


All very good questions, and ones that have so far not been answered except by that shrug.

TSB: She's as shrug as a bug in a rug! Might be time for another limerick? gwb

TSB: Watching John Kerry addressing all out friends in Havana and expecting Putin and Fidel to sail past in the background on a Russian cruiser and maybe fire off a salute while a bear bomber flies over. gwb