Russian FM Lavrov: "I don’t remember any case of a dictator being removed smoothly, without violence" 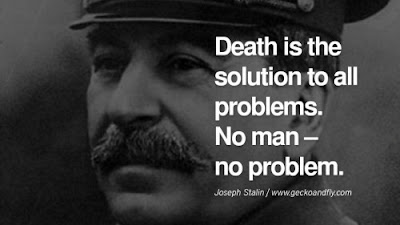 Is there any example of a dictator being removed without violence, and/or an example of regime change that didn't make things worse, at least in the near-term? There are none that I can think of, anyway.

“Death is the solution to all problems — no man, no problem." The quote is actually from Anatoly Rybakov, the dissident Russian writer, and not Josef Stalin. But I thought of that quote while trying to answer the question Russian Foreign Minister Lavrov tossed back to the press at his press availability with SecState Tillerson earlier this week.

Josh Lederman, Associated Press, asked the two how they plan to remove Bashar al-Assad from power. Lavrov was having none of it.


FOREIGN MINISTER LAVROV: (Via interpreter) As far as Syria is concerned and Bashar al-Assad, we talked today about the history, and Rex said that he was a new man and is not interested so much in history; he wants to deal with today’s problems. But the world is so constructed that unless we look at what’s happened in the past, we won’t be able to deal with the present. Particularly in a situation where a group of countries – Western countries, the NATO countries – were absolutely obsessed with eliminated – eliminating a particular dictator or totalitarian leader.

When it was a question of ousting Slobodan Milosevic, NATO unfurled a huge campaign. It was a very coarse, blatant violation of international law. They even bombed the place, which is certainly a war crime whichever way you interpret the Geneva Convention, and they bombed the headquarters. And there were also attacks on trains, the Chinese embassy, bridges, and so on and so forth. This lasted some two months, and after all this, which was very near to dual purpose – weapons of dual purpose, then they ousted him.

Then there was the question of Saddam Hussein. We know after the invasion – we know what it was based on, and then Tony Blair afterwards repented publicly that all this was a fake. And you all know about that, know worse than we do.

And then there was Qaddafi. It was declared that this dictator had no place in his own country and this was against democracy. We know what happened in Libya. The Libyan Government is now under a huge question mark. We spoke about this, or President Putin did speak about it yesterday with the Italian president, and we are both trying to stop the situation of the country slipping into full illegal immigration, gun running, and so on.

So, incidentally speaking, we have some quite recent – even more recent examples. Sudan – President Bashir was declared to be under prosecution by the International Court of Justice, and President Obama decided that in order to settle this problem, you had to divide the country up into two. And the southern part very actively asked for our assistance in dealing with President Bashir, that the Americans want to see – (inaudible) that he should be the head of the – both states. He kept his word. He divided the country into two parts according to the American project of the administration of President Obama, and with that – with the effect that sanctions were introduced against their own child, on Southern Sudan.

So this insistence on removing or ousting a dictator or totalitarian leader – we have already been through it. We very well know, only too well, what happens when you do that. I don’t remember any case of a dictator being removed smoothly, without violence. So in Syria – and I have stressed this on many times – we are not staking everything on a personality, on President Assad, as is being done in Libya at the moment. We are simply insisting that everybody sits around a table and talks about it and comes to agreement. As has been enshrined in the Security Council resolution, we want to install dialogue with all the players concerned, and we want the Syrians themselves, without any kind of exclusion, to be represented in this process.


That was a darn good press conference, I think. I'm not sure I like the new Loquacious Rex as much as I did the old Silent Rex Tillerson, but he still kept his remarks brief and to the point. So far, so good.

Posted by TSB at 10:39 AM
Labels: Rex Tillerson