More Documents Released in the ISIS Bride Case - Citizen or Not?


After arriving in the ISIS caliphate in November 2014, Hoda Muthana went by a few different names on social media, including @AhlulDhikr, @ZumarulJannah, and Umm Jihad. You can find that passport bonfire tweet and more details at the Counter Extremism Project, which tracked her online activities for some time.

Did Hoda first make a copy of the inside page before she burned her passport? Because you never know if you might want a replacement passport some day.

And was that passport valid in the first place? Yesterday, the State Department released a statement that Hoda is not a U.S. citizen, despite being born in the U.S., because her father was a diplomat with the Yemeni Mission to the UN when she was born in 1994.

But today, her father released a 2004 document from the USUN that states he ceased to be a member of that Yemeni Mission one month before Hoda was born, which, if true, means she has a claim on U.S. citizenship. That document was used to obtain Hoda's first passport in 2004, at age ten. 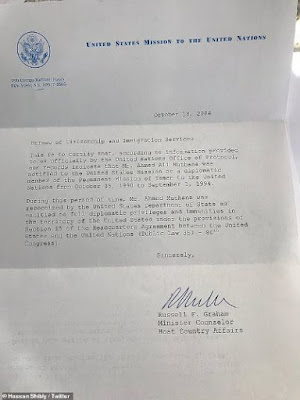 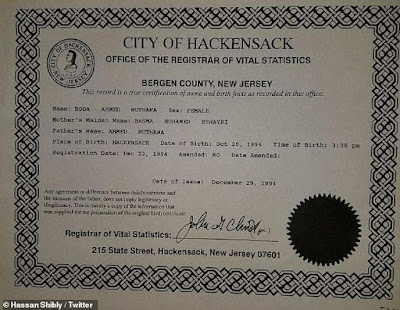 That 2004 memo from the USUN may not fully answer the question of whether or not Hoda's father was a foreign diplomat when she was born. First of all, it has to be verified. Then, what exactly was the father's status after leaving the Yemeni UN mission? Did he retain his diplomatic passport and visa? Was he employed by another diplomatic mission of the Government of Yemen, say, its New York City Consulate? Doesn't Article 39 of the Vienna Convention on Diplomatic Relations recognize immunity for a “reasonable period” of time between the end of an assignment and the diplomat’s departure from the country? What if he doesn't depart?

Furthermore, citizenship at birth aside, didn't Hoda Muthana in effect expatriate herself when she joined the ISIS caliphate?

There is an expatriation law explainer online that is generally supportive of Hoda's claim to citizenship, but also sums it up this way:


In a nutshell, the Supreme Court has repeatedly insisted that the Constitution requires expatriation to be based upon some voluntary, affirmative renunciation of citizenship or pledge of fealty to another sovereign – and not simply a punishment imposed by the state.


Can’t we reasonably conclude from Hoda Muthana's own words and actions that she did just that? That she voluntarily renounced her U.S. citizenship and became a loyal subject of, and an activist for, the ISIS caliphate? Or can she take back those words and actions now that ISIS has been destroyed and she’s changed her mind?

Historical side note-wise, there might be a pretty good precedent for how to treat foreign volunteers after a failed war: how were the U.S. citizen volunteers in the Spanish Civil War repatriated after the collapse of the Spanish Republic? Some of them never got back.

Thanks TSB! It's all clear to me now. gwb