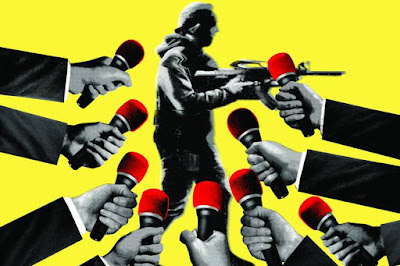 File it away under Good Advice We Probably Won't Take, but a serious case has been make that media saturation of mass shootings is a large factor in the recent increase in the frequency of those incidents, and we could reduce their frequency by reducing the media coverage.

Three years ago a paper was presented at the American Psychological Association’s annual convention that proposed denying mass shooters the notoriety they seek. Since, the authors said, people who commit mass shootings in America tend to share the traits of rampant depression, social isolation, and pathological narcissism, they may commit their atrocities largely for the purpose of gaining media coverage. Denying that coverage would be like denying oxygen to a fire.

Here's the paper: Mass Shootings and the Media Contagion Effect.

Quoting from a press release by the author:


“Mass shootings are on the rise and so is media coverage of them,” said Jennifer B. Johnston, PhD, of Western New Mexico University. “At this point, can we determine which came first? Is the relationship merely unidirectional: More shootings lead to more coverage? Or is it possible that more coverage leads to more shootings?”

Johnston and her coauthor, Andrew Joy, BS, also of Western New Mexico University, reviewed data on mass shootings amassed by media outlets, the FBI and advocacy organizations, as well as scholarly articles, to conclude that “media contagion” is largely responsible for the increase in these often deadly outbursts. They defined mass shootings as either attempts to kill multiple people who are not relatives or those resulting in injuries or fatalities in public places.

The prevalence of these crimes has risen in relation to the mass media coverage of them and the proliferation of social media sites that tend to glorify the shooters and downplay the victims, Johnston said.

“Unfortunately, we find that a cross-cutting trait among many profiles of mass shooters is desire for fame,” she said. This quest for fame among mass shooters skyrocketed since the mid-1990s “in correspondence to the emergence of widespread 24-hour news coverage on cable news programs, and the rise of the internet during the same period.”

She cited several media contagion models, most notably one proposed by Towers et al. (2015), which found the rate of mass shootings has escalated to an average of one every 12.5 days, and one school shooting on average every 31.6 days, compared to a pre-2000 level of about three events per year. “A possibility is that news of shooting is spread through social media in addition to mass media,” she said.

If the mass media and social media enthusiasts make a pact to no longer share, reproduce or retweet the names, faces, detailed histories or long-winded statements of killers, we could see a dramatic reduction in mass shootings in one to two years,” she said. “Even conservatively, if the calculations of contagion modelers are correct, we should see at least a one-third reduction in shootings if the contagion is removed.”

She said this approach could be adopted in much the same way as the media stopped reporting celebrity suicides in the mid-1990s after it was corroborated that suicide was contagious. Johnston noted that there was “a clear decline” in suicide by 1997, a couple of years after the Centers for Disease Control convened a working group of suicidologists, researchers and the media, and then made recommendations to the media.

Now, asking the news media to exercise self-restraint is probably futile, and social media by its nature is ungovernable, so I don't suppose there is much chance that we will really deny mass shooters publicity. Although, I have to admit the news media did pretty much memory-hole the attempted mass murder of Congressional Republicans two years ago by a crazed Bernie Bro. But more often, political agendas are served by rampant feeding on the red meat of mass shootings.

Incidentally, no shooting is necessary in order to commit mass murder or political terrorism. One of the very largest mass murders ever occurred three years ago using, not firearms, but a truck driven into a crowed, killing 86 persons.

TSB: https://www.axios.com/mitch-mcconnell-fractures-shoulder-kentucky-f22f5892-8a00-4158-93f5-c1aa1c4dfc21.html I wonder if Mitch had a few "Old Turkey Bourbons" while taking a call from Chuckie Schumer about cancelling the summer recess? gwb

Maybe Jack Daniels. My Army buddies said if alcohol is a crutch, then JD is a wheelchair. I'm a one-beer limit guy myself, but even I could see the truth in that.