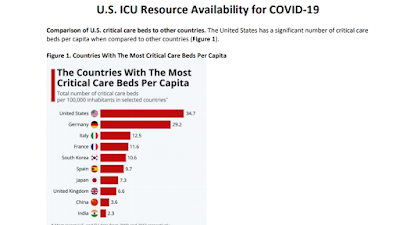 TSB: Finally a new big post!! Yaaaa! Along those lines: Images From New York's First Drive-Thru Testing Facility: The test only takes 15 minutes and while you wait they have girls in bikini's doing car washes. On your way out you can do the McDonald's drive thru or back on the highway. Everything is free except they had to import most of the girls from Arizona and California so they have a funny accent. gwb ps: going to be 20 deg here tonite so drip your faucets!

I would be concerned about medical tests you don't have to get out of your car for. That just seems overly casual.

TSB: 6 hrs ago I started a comment about BoJo locking down all the over 70 crowd for 3 months to save the hospital system and ended it with "except the Queen" Now this! https://www.thesun.co.uk/news/11175256/queen-coronavirus-quits-buckingham-palace/ Looks like the Queen has escaped!! God save the Queen! Seems like a historic event. gwb

TSB: Gee Whiz! Bernie pledges 100% support for Joe if he wins the nomination and we have our first case of the virus in my town. Silver and gold are down 30% since last week and the stock market might not even open today.
A. Fauci says we need a travel ban which could be days away and 2 ER docs are in ICU with the virus, one in my state. Trump says this will clear up by early April and I'm starting to believe him. I'm not getting in anyone's face (I mean working) until this blows over. With no more primaries for awhile and no more economy for a longer while it looks like Trump could only be challenged by someone who had there wits about them. That we don't have! gwb

GWB: I don't think Bernie is really serious about being a neo-Bolshevik, since he completely lacks the ruthlessness to attack his adversaries. He didn't attack Hillary, and now he doesn't attack Biden. He's the most lackadaisical revolutionary ever.

TSB: Last nite the Dem nomination was decided. On the same time Iranian mobs tried to stop the closing of their most sacred shrine in the midst of the most deadly viral epidemic in 100 years. So you have mobs of Dems, Shia and US soldiers in Europe Defender 2020 all challenging the pandemic while Italy is showing the lowest pollution levels ever! https://www.zerohedge.com/health/watch-hardliners-storm-popular-qom-shrine-after-iran-belatedly-shutters-it-amid-outbreak
The picture of thousands of people of all ages enjoying Clearwater Beach was much more inspiring for me. gwb

GWB: I'm not totally convinced Biden has it in the bag. I see polling that puts Bernie only about 6 points behind Biden nationally. And then, there's the all-important matter of VP running mate yet to come. There's an outside chance the Sandernistas might pull off an upset at the convention.

TSB: Bernie just learned that restaurant workers get $2.15/hr plus tips. 80% of them are women. The majority of them are not eligible for state unemployment so on March 13 they began getting layed off. Tnat mean't they had no income after that. In the next 2 weeks the estimate is that 8-9 million of them will be unemployed. The airline industry is the same thing: instant shutdown and bankrupt airlines happening every day. Presidential candidate Joe Biden could lose a lot of votes if he doesn't know about this yet since he has been raising a lot of money from people like the American Restaurant Association who put these rules in place for a lot of years.
https://youtu.be/qBstcJ2GjGQ Bernie virtual town hall gwb

TSB: Governor "Macron" of New York is calling in the Army to stop the "China Virus" currently killing 1/hr hour in NYC. How long til Subway crews stop showing up for work? Trump has declared NY a Major Disaster and will push for a 2 Trillion dollar printing bonanza to meet it head on. Could BoJo be far behind? gwb Howard Schultz has announced a huge stock buyback for Starbucks, probably will follow up with a bailout request. Should be sunny and 60 at the beach this afternoon!

GWB: It's the wait staffs that get most of my sympathy. Airlines, not so much. I've been ordering take-out meals from the two (non-chain) restaurants that I go to regularly just to give them what support I can.

Joe Biden seems to have taken a time-out from his campaign. I've only seen a couple statements from him on the COVID crisis, and those were demanding that Trump do something that he had already, in fact, done. A political juggernaut he is not.

The same goes for the Mayor of NYC. He's gotten cross-ways with Governor Cuomo and come off much the worse. This crisis is good for separating the real politicians from the posers.