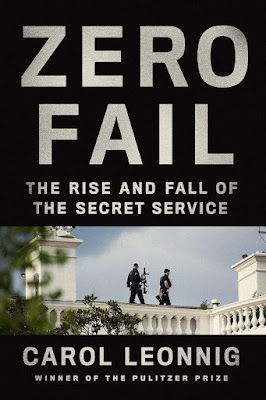 With such entertaining material to work with, especially the sex scandals, it's no surprise that a WaPo reporter has written a book about the rash of Secret Service failures we've seen in recent years. Of course, the Secret Service spokesperson has pushed back:

Cathy Milhoan, director of communications for the Secret Service, praised the agency in a statement. “The U.S. Secret Service is aware of an upcoming book which re-hashes past challenges the agency overcame and evolved from,” she wrote. “Now and throughout its 156 year history, the agency’s skilled workforce is dedicated to the successful execution of its critical protective and investigative missions.”

All those many "challenges," ranging from the Columbian prostitutes to the demented intruders who had the run of the White House and grounds, are now in the past? Okay, if you say so.
Personally, I still think the Service is running a clever media campaign to attract mid-20s male slackers to government employment.
Posted by TSB at 3:21 PM
Labels: U.S. Secret Service

Was reading your blog... interesting content. Reminded me of the blog Diplopundit written by Mr. Nicholas Kralev who is an American author, former professional journalist, analyst, speaker and entrepreneur specializing in international affairs and global travel. Apparently the blog has fallen on hard times and is seeking donations to keep it running. Please give support!

Thanks for your comment. I believe Nicholas Kralev is a writer on diplomacy (http://nicholaskralev.com/) but is not to be confused with Diplopundit, a long-time blog on State Department matters written by Domani Spero.

Domani Spero does seek donations from time to time - she works at her blog so much that its a full-time job! - however, so far as I know, she's doing well.

Please do keep following both Kralev and Diplopundit!