Sweet deal for CG Hermosillo, which gets to move out of the quirky building it has occupied since the early 1980s, the one that kind of resembles a Pizza Hut only with a pagoda roof. You can see it in this photo, courtesy of Mexican news media: 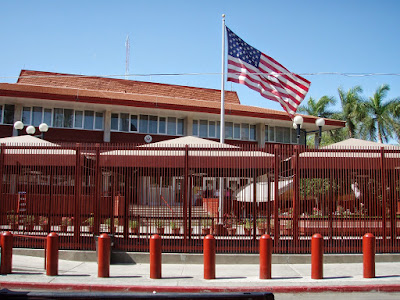 The old building was the product of a family-owned construction firm that at one time very nearly monopolized the diplomatic construction business of the USG in Mexico. The patriarch had been a subcontractor on the early 1960s embassy job in Mexico City and his two sons went on to build most of our consulates, including the ones in Tijuana, Guadalajara, Ciudad Juarez, and Monterrey. The family saved design expenses by using the exact same design to build both Juarez and Monterrey, which is commendable.
Hermosillo was the end of the family's streak of good luck, as by then OBO had finally decided it would henceforth take charge of its own business in Mexico. Ever since, OBO has been replacing one old Mexican consulate after another with 'safe, secure, and sustainable' New Consulate Compounds. Plus a New Embassy Compound, too, assuming that project ever gets completed.
So, NCC Hermosillo marks the end of an era for OBO in Mexico. What's more, the old consulate was the last time OBO ever built a new office building anywhere in the world without taking security standards (boo, security) into account, because in that pre-Inman Commission day there were no standards, at least none that were mandatory.
Enjoy the new building, Hermosillo.
Posted by TSB at 4:59 PM
Labels: Bureau of Overseas Building Operations, Fortress Embassy, OBO

Well Skep just looking at the news and it seems the era I inhabited is coming to an end.
Sennacherib

That sounds very alarming! I think I know how you feel, though.

Well I was kinda hoping for immortality, but that seems to be a strictly religious thing involving a lot of physical unpleasantness. Alas it seems the era and I must move along.
Sennacherib

This does not mean I will quit commenting.
Sennacherib

By all means, never quit!