Back to School, HAMAS Style 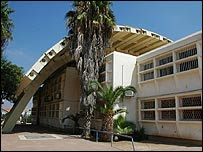 "Haroeh school is much like any other in Israel - two floors of classrooms, a play area, bike racks - apart from the massive metal umbrella arching overhead, to shield its 120 pupils from rocket attacks." - BBC, 9/4/07

Around 8 AM this morning, the second day of school, someone in the HAMAS-run Gaza Strip fired three Qassam rockets within ten minutes, evidently hoping to kill some of the Israeli kids who were on their way to the Haroeh School, which is located in Sderot, one kilometer outside Gaza. See the BBC story at: http://news.bbc.co.uk/1/hi/world/middle_east/6977346.stm.

Thousands of these anti-personnel fragmentation weapons have been fired at Sderot and every other Israeli town within reach ever since Israel withdrew from Gaza in 2005. The firing pace has picked up considerably since HAMAS took over Gaza last June. The only protective measures the Israelis can take are to fortify schools and other buildings, and try to detect Qassam rocket launches with airborne sensors in an unmanned blimp. When a rocket is detected and the Code Red ("Tzeva Adom") alarm is sounded, Israelis know they have a few seconds to run to the nearest shelter. Here's a link to a video showing school kids reacting to today's Code Red: http://joesettler.blogspot.com/2007/09/sderot-kassam-video-hits-near-school.html.

If anything even remotely similar to this were happening to any place in America, can there be any doubt how we would react? I assure you it would not be in a calm, measured, and diplomatic way. Yet, we seem to expect the Israelis to keep putting up with an endless stream of this low-grade warfare so as not to upset the so-called "Peace Process." Processed peace is kind of like processed cheese, in that it has little relation to the real thing.