This Week in The History of Terrorism, September 16 to 22 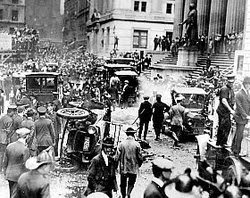 Here's my summary of significant past events for this week. This week is notable for the very first use of a vehicle-borne explosive device, which was detonated on Wall Street in 1920 [picture at left]. The vehicle was a horse-drawn wagon, and the idea behind it was a leap of the imagination that inaugurated the era of the carbomb.

1920 (United States) – A horse-drawn wagon filled with dynamite and scrap iron was parked outside the J.P. Morgan building at the corner of Wall and Broad Streets in the heart of American capitalism and detonated at noon when the streets were full of financial workers, killing more than 40 persons. The bomber was not caught but may have been an Italian-American anarchist named Mario Buda. Leaflets placed at the scene suggested that the bomb might have been a response to the murder indictment in Massachusetts of Buda’s fellow anarchists Sacco and Venzetti one month earlier.

The tactic was a huge escalation from previous anarchist practices of thrown or hand-carried bombs. The act of attacking the public at large in a symbolic location with a vehicle-borne bomb was ahead of its time. The next instance of a vehicle bomb did not occur until the 1940s.

The assassination was approved by the LEHI leadership (which included the future Prime Minister Yitzhat Sharmir) and planned by the operations chief in Jerusalem. A four-man team ambushed Bernadotte's motorcade in downtown Jerusalem, killing him and an aide, French UN observer Colonel Andre Serot. LEHI denied responsibility for legal and political reasons: the attack occurred a few days after the establishment of the State of Israeli and the incorporation of all armed groups under central authority, therefore the act was a crime against the new government as well as a political embarrassment.

According to journalist Kati Martin in A Death in Jerusalem, the decision to assassinate Bernadotte may have had a basis in social divisions within the Israeli Jewish community. LEHI’s extremists were often Sabras (native-born Jews) or Jewish immigrants from Arab nations, while the mainstream Israeli Government authorities were mostly European immigrants. Some LEHI-ists believed that the European Jews were subservient to an upper-class noble like Count Bernadotte, making him a dangerous influence.

1992 (West Germany) – Four Iranian Kurdish dissidents, including the leader of the Kurdish Democratic Party of Iran (KDPI), were assassinated by Iranian agents while meeting at Berlins’s Mykonos restaurant. According to testimony in 1996 by former Iranian President Abolhassan Bani-Sadr, senior Iranian government officials and religious leader Ayatollah Ali Khamenei ordered the killings. Two Iranians, Kazem Darabi and Abbas Rhayel, were sentenced to life in prison, and two others, Yousef Amin and Muhammad Atris, received sentences of 11 years and five years and three months, respectively, for the killings.

1997 (Egypt) – A bomb attack on a Cairo tourist bus killed two Germans.
2001 (United States) – The first mailing of anthrax-filled letters from Trenton, New Jersey, occurred. No party took responsibility, and no one had ever been arrested for this use of a biological weapon.
September 19
1989 (Niger) – UTA Flight 772 to Paris exploded over Niger, killing 170. Libya was responsible. The brother in law of Libyan leader Muammar Gaddafi and five other Libyans were put on trial in absentia for the bombing. In 2003, Libya admitted responsibility and agreed to pay compensation to the families of the victims. The motive is usually ascribed to revenge on the French for supporting Chad against the expansionist projects of Libya. One of those killed on UTA 772 was Bonnie Barnes Pugh, wife of the U.S. Ambassador to Chad, who had been on her way back home to help plan her daughter's wedding.
1972 (United Kingdom) – A letter bomb mailed to the Israeli embassy in London exploded, killing a diplomat, Dr. Ami Sachori. Eight bombs were addressed to personnel at the embassy, but three were detected in the embassy’s mail room and four others intercepted by British postal sorters. The devices all originated in Amsterdam. Black September was believed to be responsible (many of the letter bombs were in fact signed by Black September) and reprisal letter bombs were sent by Israeli groups to Palestinian Liberation Organization (PLO) addressees, injuring six. A total of 51 letter bombs were sent from Amsterdam to Israeli embassies around the world, but Dr. Sachori in London was the only fatality.

1975 (United States) - Patricia Campbell Hearst was arrested in San Francisco on charges related to violent acts committed by an urban terrorist group, the Symbionese Liberation Army. Hearst had been kidnapped by the SLA the previous year and was held for ransom, but then joined the group and participated in a bank robbery and other crimes. When booked by police, Hearst gave her occupation as “urban guerrilla.”

2003 (Iraq) – Governing Council member Akia-al-Hashimi was mortally wounded in an ambush on her motorcade in Baghdad. The incident was the first attempt to assassinate an official of the US-installed provisional governing authority. The attack involved at least five men in a pickup truck and a backup car throwing grenades and firing rifles at Hashimi’s two-vehicle convoy as she was being driven to work about 8:45 a.m. No group claimed responsibility for the shooting, but Ahmad Chalabi, then chairman of the Governing Council, blamed it on “remnants of the Baathist regime and Saddam’s assassins” from the ousted government.

1984 (Lebanon) – The U.S. Embassy annex in West Beirut was attacked in a suicide carbomb operation sponsored by the Islamic Jihad Organization, killing 23 persons were killed. The bomber drove at high speed up the embassy’s main access road in a bomb-laden truck similar to embassy vehicles and bearing diplomatic plates. The explosive charge was over 1,100 pounds of high explosive, and it was detonated in front of the 5-story main office building. The West Beirut embassy annex had been open only six weeks. The previous embassy chancery building in downtown Beirut had been blown up in April 1983, killing 61 people.

September 21
1976 – United States) - Orlando Letelier del Solar was assassinated while riding to work at the Institute for Policy Studies in Washington, DC. Letelier had been a cabinet member and ambassador of the government of Chile under the Marxist President Salvador Allende. The assassination was carried out by agents of the Chilean military regime that overthrew Allende, and was part of a broader campaign of attacking expatriate dissidents throughout the Americas.

The bomb was fixed to the undercarriage of the car and remotely detonated by one of the Chilean agents as Leteilier's car drove through Sheridan Circle. Several people were eventually convicted for the murder, among them Michael Townley, a U.S. citizen who worked for the Chilean regime, and who confessed that he had hired five anti-Castro Cuban exiles to booby-trap Letelier's car.

1889 (United Kingdom) – A large bomb placed in the recreation center of the Royal Marine School of Music killed ten troops and wounded 22, most of them teenagers. The blast destroyed all three floors of the building and severely damaged dozens of nearby houses. The IRA was responsible, although no one was ever held prosecuted. Opposition party politicians expressed concern about security at the base, which was partly guarded by a private security firm.
The bombing was part of an IRA campaign on the 20th year of the deployment of British troops to Northern Ireland.
1975 (Northern Ireland) – A series of 17 IRA bombs exploded in Belfast, injuring twelve persons. The attacks primarily targeted security forces, and were in retaliation for British Army and police (Royal Ulster Constabulary) raids on Irish Republican strongholds. The attacks came during a ceasefire, but were justified by the IRA on the grounds that security forces remained legitimate targets.
Posted by TSB at 7:50 AM