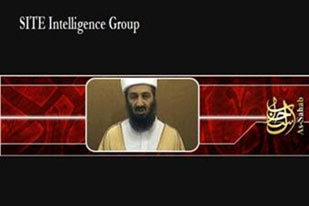 Can't you just feel the dramatic tension building? The countdown has begun to the release of Osama Bin Laden's highly-anticipated next video.

Here's today's Al Jazeera story.
http://english.aljazeera.net/NR/exeres/8426C104-D8B4-425B-9330-E9BAD99E2EA2.htm
Bin Laden 'to release new message'
Osama bin Laden, the al-Qaeda leader, is to shortly release his first videotaped message for nearly three years, according to a website on which al-Qaeda's media arm, al-Sahab, has previously posted messages. The announcement late on Thursday came just days before the sixth anniversary of the September 11 attacks on the United States.
"Soon, God willing, a videotape from the lion sheikh Osama bin Laden, God preserve him," the notice, signed by al-Sahab, said. Bin Laden was last seen in a video statement ahead of the US presidential election in 2004.
Since then, he has issued a number of audio messages, the last in July 2006 when he vowed al-Qaeda would fight the United States across the world.Proof of lifeMichael Taarnby, a specialist in political and militant Islamism at the Danish institute for international studies, said the new video would be significant as proof that he was still alive.
Last year, a leaked French intelligence report said Saudi secret services thought bin Laden had died of typhoid in Pakistan, but Saudi Arabia said such reports were just speculation."I don't think we'll find any major surprises,the usual threats, the usual diatribes against the West," Taarnby said.
"Osama bin Laden is an iconic figure now, but it doesn't seem he has that much control over actual events or operations."The website that carried the notice showed a still photograph purportedly from the coming video, with bin Laden addressing the camera, his beard fully black. In his past videos, bin Laden's beard was almost entirely grey with dark streaks. Bin Laden's beard appears to have been dyed, a popular practice among Arab leaders, Rita Katz, director of the SITE Institute, a Washington-based group that monitors "terrorist" websites, said."I think it works for their [al-Qaida's] benefit that he looks young, he looks healthy," she said.
The US said that any video message would be closely scrutinised and that efforts to capture the al-Qaeda continued."Obviously, it's a huge priority for us to capture and kill bin Laden and bring he and the rest of the leadership to justice," Frances Townsend, the US president's homeland security adviser, told CNN television."We're being manipulated every time that they issue a statement, because they're trying to use the media as a way to terrorise us," she said.
Bin Laden is believed to have escaped US efforts to capture him during a December 2001 battle in Afghanistan's Tora Bora mountains. The al-Qaeda leader is now thought to be hiding in the remote tribal areas along the Pakistan-Afghanistan border.
Posted by TSB at 5:14 AM