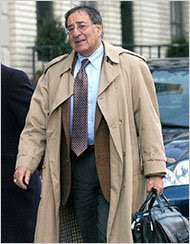 This news leaves me puzzled. Leon Panetta is a former California Congressman, former OMB Director, former Clinton White House Chief of Staff and former lawyer. He's currently the head of a public policy institute. He gives every indication of being an all-around nice guy. I once worked on an inter agency task force that reported to him when he was Chief of Staff, and I got no bad vibes from him. But I'm at a loss to see what background or experience he has that's pertinent to the job of CIA Director.

According to his Wikipedia entry, Panetta "was chief of operations and planning of the intelligence section" at Fort Ord, California, during his Army service (1964-1966). Also, he's wearing a trench coat in the photo that accompanied the New York Times story, and, when photographed from certain angles, he looks kind of sneaky. Beyond that, what recommends him to be CIA Director?
Posted by TSB at 12:43 PM
Labels: Leon Penetta