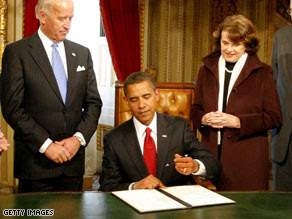 Until I saw him sign a document today I hadn't noticed that Obama is left-handed. That makes him our eighth sinistral President, which is a pretty impressive record for a despised minority group that includes less than ten percent of the U.S. population. The other seven were:

Off the top of my head I know that presidential candidates John McCain and Ross Perot were also lefties, so there may be some truth to the notion that left-handers are unusually prone to become President.

In his book Right-Hand, Left-Hand, Chris McManus of University College, London, claimed that left-handed people have historically produced an above-average number of high achievers and that left-handers' brains are structured in a way that widens their range of abilities, particularly language abilities. In 2006, researchers at Lafayette College and Johns Hopkins University published a study that found left-handed men are 15 percent richer than right-handed men for those who attended college, and 26 percent richer if they graduated.

Being left-handed myself, I'm pleased to think that we have some kind of advantage over the right-handed majority. I might feel clumsy using scissors and other right-handed products but, by God, I have a better chance than most righties of becoming rich or President!
Posted by TSB at 5:57 PM
Labels: Barack Obama