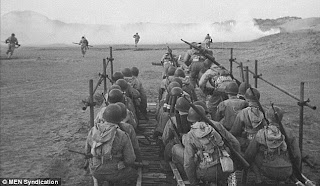 The Daily Mail has a story today (here) about the discovery of 38 reels of film that depict parts of Exercise Tiger, the 1944 D-Day practice landings in Southwest England. During the exercise, 946 U.S. soldiers and sailors were killed when German torpedo boats attacked a convoy of landing ships.

Secret footage of U.S. soldiers training alongside British troops for D-Day in South-West England have been unearthed from a dusty archive and seen for the first time in 65 years.

The 38 reels - lasting ten minutes each - show a variety of images including tanks rolling across beaches and soldiers wading through waves. In another sequence, troops are lined up in make-shift landing barges.

Here's a link to one of the films, which shows troops deploying out of a simulated Higgins Boat landing craft (photo above).

Exercise Tiger was one of a number of pre-invasion exercises that took place in April and May of 1944. It took place at Devon's Slapton Beach, which was selected for its similarity to the portion of Normandy's coastline that was assigned to the U.S. Army's 4th Infantry Division in the D-Day invasion and designated "Utah" Beach. The disaster that took place during the exercise was not exactly covered up, but it certainly was officially minimized, due to both official embarrassment and pre-invasion security concerns. The residents of coastal Devon had been relocated inland as a wartime measure so there were really no civilian witnesses, and the casualty statistics from Tiger were not released until August 1944 along with the casualties of the actual D-Day landings themselves. There was little official interest in the whole sad episode after the war was over.

There's a good book about the incident (The Forgotten Dead) by the late Ken Small, which describes both the exercise itself and the author's process of discovering and memorializing what had happened at Slapton Beach, a process that began when he became curious about the large number of American military artifacts and personal belongings that he kept finding on and around the beach.
Posted by TSB at 9:30 AM
Labels: D-Day, U.S. Army, U.S. Navy, World War II

This is a great discovery. What I would like to see next is the offical records of the US Army of the survivors after the e boat attacks. My father was one of those survivors and he was questioned by Genral Marshall. He was held under guard for 30 days afterwards. Not on leave as described in other articles.

Interest in the event might be picking up in the USA. Yesterday, I saw a copy of The Forgotten Dead in circulation in a public library.

In the UK they had a radio play about the event; we need something like a television episode here to raise public interest.