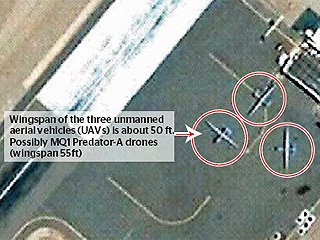 Senator Feinstein blurted it out last week, and the Washington Post wrote about it last March, but it looks like it was Google Earth that first told the world the U.S. was flying Predator drones from bases in Pakistan.

Predator reconnaissance drones were visible in Google Earth images of the Shamsi airbase in Pakistan's southwestern province of Baluchistan as early as 2006, according to the Times of London today (here).

The Google Earth image now suggests that the US began launching Predators from Shamsi — built by Arab sheiks for falconry trips — at least three years ago.

The advantage of Shamsi is that it provides a discreet launchpad within minutes of Quetta — a known Taleban staging post — as well as Taleban infiltration routes into Afghanistan and potential militant targets farther afield.

The association of falconry with Predator drones is absolutely perfect. Both types of bird glide high in the sky, show great patience as they stalk their prey, employ incredible long-range optics, have human ground controllers, and swoop down very suddenly to take their targets unaware. What could be a better analogy? And what place could be a better base than Shamsi for aerial hunting?
Posted by TSB at 6:30 AM
Labels: Pakistan, Predator