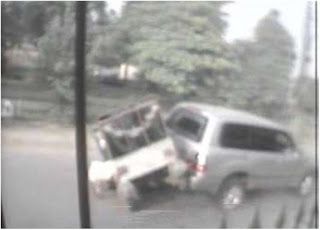 Video frame capture of CG Tracy's vehicle reversing at high speed out of the ambush kill zone, taking along with it a Tuk-Tuk auto rickshaw that was in the way

The U.S. State Department's Bureau of Public Affairs, Office of the Spokesman, announced today that Secretary Clinton will present Lynne Tracy with the Secretary's Award for Heroism.

Secretary of State Hillary Rodham Clinton will recognize Lynne Tracy with the Award for Heroism at 10:30 a.m. on Monday, December 7 at the Department of State. Ms. Tracy recently completed a three-year tour as Principal Officer at the U.S. Consulate in Peshawar, Pakistan. On August 26, 2008 gunmen ambushed her vehicle, riddling the car with bullets. Despite this, she remained in Peshawar for another year after the attack and continued to pursue U.S. policy at this critical post.

Posted by TSB at 11:06 AM
Labels: Department of State, Peshawar