The U.S. Embassy in Ottawa, Canada, is housed in a rather striking chancery that is about as far from a "Fortress Embassy" as a modern U.S. diplomatic office building can get. It's located in the middle of a downtown central business district, has lots of glass, no perimeter wall, and almost no setback distance to the surrounding streets. What's not to like about the place?

Well, Ottawa's National Capitol Commission (NCC) doesn't like the concrete planters that were placed on Sussex Street in front of the embassy in 2001 - two years after the new embassy opened - as a temporary measure taken in coordination with Canadian authorities in advance of the G-20 summit in Ottawa. The Ottawa Citizen reported this week that the embassy, the city and the NCC are looking for a way to remove the barriers:

The United States Embassy has confirmed that negotiations are underway to see if the massive concrete barriers on the perimeter of the property can be removed without jeopardizing its security.

The city wants the barriers on Sussex Drive and MacKenzie Avenue replaced with bollards and lanes freed for traffic, and an embassy spokeswoman said talks are going on with the National Capital Commission and the city about the projected road improvements.

Sophie Nadeau would not discuss details of the planned changes to security arrangements around the embassy ... We are currently in discussion, and the goal is to find a way to ensure that the embassy’s continuing security requirements can be addressed in harmony with the plans being undertaken by the NCC and the city.”

The Ottawa Citizen also ran a nice contrary opinion piece on the matter by David Jones, a retired U.S. diplomat who served in Ottawa, which provided background on the diplomatic transactions between the U.S. and Canadian governments that by the mid-90s produced a mutual decision to build the new U.S. embassy on Sussex Street. 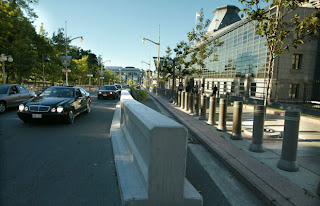 Here's what the barriers look like; concrete planters on the curb lane of Sussex, and steel bollards (short vertical posts) on the sidewalk

You can get a feel for the situation from this local TV report. The barriers that are subject to removal are the planters, i.e., those boxy concrete things, and they serve the purpose of gaining a few more meters of separation between the chancery and the vehicles passing by on Sussex, thereby increasing, however marginally, the chancery's best protection against a vehicle-borne bomb.

The chancery has an unusual design, with one facade (seemingly) constructed all of glass. Putting on my physical security hat, I would say the building is better than it looks. However, there is no way to overcome its major security flaw - the very short setback distances to the surrounding streets.

That vulnerability was understood all along by the U.S. officials who oversaw the design and construction of the chancery, and it was regarded as an acceptable price to pay for a very un-fortressy building. Here's how the trade-off was summed up in a January 2000 article in State Magazine:

Security has been a constant concern during this project's site selection, design and construction stages. The challenges of a downtown location on a site without a 100-foot setback from adjoining roads created special challenges. A perimeter fence, bollards, forced-entry and ballistic steel doors and windows and thick walls are the more obvious security features. Less obvious is that behind the western side's glass is a wall and windows structure similar to the eastern side's facade.

Yet, despite the critical need for such security measures, the chancery is not, as some claim, a bunker or "Fortress America." Rather, it's an impressive balancing of security with open diplomacy: a cooperative achievement of the U.S. designer, the Canadian planners and builder, the post, the Bureau of Diplomatic Security and the Office of Foreign Buildings Operations.

Here are a few quotes from a 1999 New York Times story about the new embassy. The story is worth reading in its entirety, for it very accurately conveys the security atmosphere of the time and the political currents that influenced the site choice and building design.

What is remarkable about this low-profile, steamship-shaped embassy, inaugurated here last week by President Clinton, is that it stands in the heart of a city. In a depressing era of truck bombs and embassies hiding behind high walls in suburban compounds, the glassy new mission building makes a powerful statement for an endangered species: the urban American embassy.

For 20 years, the fate of the embassy, like blueprints for American embassies the world over, was pushed and pulled by issues of security. As the United States enters the 21st century as the only superpower, embassy design has moved from the monumental to the hunkered down. The design seems to reflect a cautious, defensive world view that sees the mission of American diplomats as one of managing resentment.

Canada had reserved for the United States the last vacant lot on Parliament Hill, a lot prominent on Sussex Drive, the ceremonial parade route between Parliament and the Prime Minister's residence. In symbolic symmetry, the United States set aside for Canada the last open lot on Washington's ceremonial thoroughfare, Pennsylvania Avenue. A decade ago, when Canadian diplomats settled into their privileged position, the Ambassador moved into an office with a rare and magnificent bay-window view of the United States Capitol.

In 1983, early in the design saga here, the first truck bomb reverberated through American diplomacy with an explosion at the United States Embassy in Beirut, Lebanon, that killed 63. In 1985, a commission headed by Bobby Ray Inman, the retired admiral and former Deputy Director of Central Intelligence, stipulated that new embassies should be set back 100 feet from public streets and that windows were to be limited to 15 percent of exterior wall space. [TSB note: this may be a small point, but the Inman Report did not actually stipulate any such thing. You can read it (here) and will find no mention of 100-foot setback, fenestration limits, or any other design criteria. Those standards were created later, by the State Department through an interagency process.]

Under these guidelines, the State Department ruled in 1988 that the downtown site in Ottawa was unsafe. But for the next five years, there was a lull in major bomb attacks worldwide [TSB note: during this "lull" the Israeli public diplomacy center in Buenos Aires was destroyed by a major suicide truck-bomb attack]. In January 1993, after envoys rejected suburban sites, the State Department decided to waive security standards for Ottawa, allowing 30-foot setbacks. Ottawa, like New York, was deemed a low security threat.

Going back to the design boards [after the April, 1995 bombing of the Oklahoma City Federal Building, the design architect] moved an external corridor system into the building's core, creating an atrium that now runs the length of the building, injecting light and a sense of community into the four floors of offices. In 1997, workers broke ground on the building. In 1998, truck bombs destroyed two American embassies in East Africa.

''To be in the city and not be a fortress -- that is the real problem,'' Mr. Childs said, talking of the security constraints that hung over his work from Day One.

He has labored to create the illusion of American accessibility and participation in the urban setting. When the diplomats move in and the lights go on, passers-by on either side of the building will be able to see Americans working at their desks, or trotting up and down glass-enclosed stairwells in the prow and stern of the boat-shaped building. What they may not know is that that the glass is three inches thick, bulletproof and bomb resistant.

''I have no security concerns whatsoever,'' Gordon D. Giffin, the United States Ambassador here, announced at a news conference last week. ''In Ottawa, it was critical to be part of the vibrant activity downtown.'' But walking through the building with members of the press, he refused to allow photographs of the maple wood walls, citing State Department security rules.

The opening of this downtown embassy, long advocated by Senator Daniel Patrick Moynihan, Democrat of New York, bolsters a school of thought that says that in some capitals, the combination of risk levels, prestige and working convenience comes out in favor of the United States' flying the flag downtown.

U.S. Embassy Ottawa is the crown jewel of the urban embassy / open design crowd in the diplomatic architecture community. I'm sure they have ample artsy & aesthetic cause to remove those perimeter barriers. Personally, I take a mundane risk management approach to these matters, and I would merely ask whether the additional setback the barriers provide - which is their only contribution to the physical security of the embassy - is enough to make a critical difference in the event of a truck-bomb on Sussex Street. That is a purely practical question which could be answered by a vulnerability analysis against a postulated size of bomb. Setback distance is the sort of thing that there needs to be enough of to prevent collapse of the structure; more distance than that doesn't necessarily give us any more benefit.

I have no idea whether such a vulnerability analysis has been done, or if one is planned. (If I did, I'd be too directly involved in the matter to blog about it in the first place.) Should it turn out that the few meters of setback added by the outer row of barriers is not truly critical for blast abatement, then I say they should be removed and the embassy returned to the conditions that existed when it opened in 1999. I say that not so much because I like nice architecture, as because I hate the kind of security measures that can't be justified with a straight face.
Posted by TSB at 10:26 AM
Labels: Department of State, Fortress Embassy, U.S. Embassy Ottawa