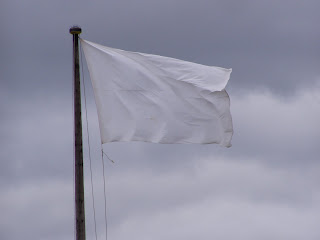 As recently as June 7th there were local media reports about the State Department's confidence in its plans to construct a consolidated hard skills training center on Maryland's Eastern Shore - "The department is conducting an environmental assessment it hopes to complete in the coming weeks. The department will then work toward breaking ground."

But those plans had been running into local opposition all along (see this for background), and the State Department was on the losing side of a recent court order for additional disclosure.

Today, the State Department ran up the white flag and surrendered:

After further analysis, the Department of State (DoS) and General Services Administration (GSA) have determined that the Hunt Ray/CrismerFarm in Queen Anne’s County will no longer be considered for the proposed DoSForeign Affairs Security Training Center. DoS and GSA remain committed to a robust and transparent public engagement process and value the input from the citizens of Queen Anne’s County and the leadership of both Federal and local representatives on behalf of the community throughout this process.

As DoS increases its workforce and presence in unstable regions of the world, the need for a consolidated training center for DoS' Bureau of Diplomatic Security is even more important to ensure the safety and security of our civilian employees and partners. DoS and GSA are actively engaged in a site selection process and look forward to opening this essential national security facility and being good neighbors.