We Shall Fight on the Beaches, Only to Surrender in the Museum? 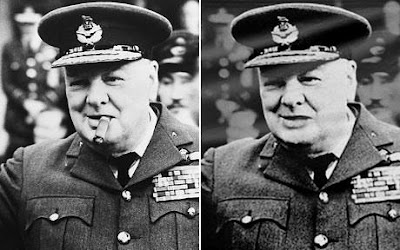 What in the world is going on over there in the oh-so-sensitive modern UK?

It was seventy years ago last month that Winston Churchill showed us what Old School Britain looked like when he refused to capitulate to Nazi Germany, but to fight on "if necessary for years, if necessary alone." (Listen to his rousing "we shall fight on the beaches" speech here, and watch the Iron Maiden video - seriously - here.)

Today, the Winston Churchill's Britain at War Experience Museum, which I have to admit looks like a great place judging by it's website, has caved in to the anti-smoking Nazis and airbrushed Churchill's cigar from a famous photo of the man. Airbrushing history? I thought only dictatorships did that sort of thing. Dictatorships like ... um ... the one run by the original anti-smoking Nazis.

The museum weenie who objected to Churchill's cigar could have simply chosen to use another photo, one in which he wasn't smoking. There must be at least one! But no, he had to vandalize a historic image, and also to make the Greatest Briton of the Twentieth Century look like a stroke victim, what with that gaping corner of Winston's mouth.

Two generations ago, they defied the Nazi war machine at the peak of its power. Now, they cringe before the censure of busybodies, those "fussy fulminators in Britain's modern health-and-safety apparatus." It's really just too sad.
Posted by TSB at 5:09 PM
Labels: Winston Churchill

There are photos without cigar. Check out to see the results of removing the cigar when tried out live!

It’s Friday, and that means that the Weekly State Department Blog Roundup is up – and you’re on it!

(If I quoted your text or used your photo(s) and you would rather I had not, please let me know. Please also be sure to check the link(s) that I put up to you, in order to verify that they work properly. If you would rather that I had not referenced you, and/or do not want me to reference you in the future, please also contact me.)  Thanks!