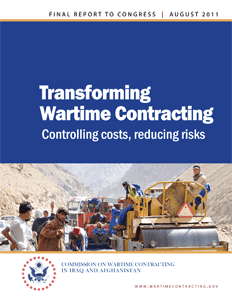 The Project on Government Oversight (POGO) blog noted yesterday that the records of the Wartime Contracting Commisssion, that watchdog on government fraud, waste, and mismanagement in Iraq and Afghanistan, will soon be sealed and put beyond access by the public.

The recently dissolved Commission on Wartime Contracting (CWC) did just about everything right. Created in the spirit of the Truman Commission, the CWC identified as much as $60 billion in contracting-related waste and fraud in Iraq and Afghanistan. In the process, the CWC held 25 hearings, released 8 reports, and published detailed recommendations intended to prevent waste and fraud from occurring in future overseas contingencies. Perhaps most important, the bipartisan commission was unanimous in its findings and recommendations, notable in a city known for its partisan gridlock.

But the Commission’s decision to seal its internal records for 20 years is just plain wrong. The decision, first reported by the Wall Street Journal, blocks the public and watchdog groups from using the CWC’s source material to build upon the important work of the Commission and to help prevent waste and fraud in overseas contingency contracting in the near term.

Clark Irwin, the CWC’s spokesman, told the Wall Street Journal the seal was justified because “there is sensitive information in there.” He cited proprietary company information, attorney work products, and classified documents as examples of such records. Another source told the Journal that the expectation that the CWC’s records would be sealed was necessary to encourage sources to speak candidly.

But Irwin’s argument ignores the fact that documents are only released by the National Archives after first going through an extensive vetting process. So whether the seal is 20 years, 20 days, or even if there were no seal at all, the truly sensitive material would be redacted or withheld.

Sources close to the CWC have told POGO that the commissioners agreed to the 20-year seal after being informed that it was standard practice. But 20 years doesn’t appear to be anywhere near standard. Congress has created six investigative commissions in the last 20 years, the most well known being the National Commission on Terrorist Attacks Upon the United States (9/11 Commission).

The 9/11 Commission, which investigated issues of the most sensitive nature, sealed its records for just five years. And even that length of time seemed too long for Thomas Kean, the 9/11 Commission Chairman, who “said publicly that he was eager for most of the records to be released as quickly as possible.” He later told Reuters that there was “no justification for withholding most of the unreleased material.”

As was the case with the 9/11 Commission, the CWC’s records aren’t available under the Freedom of Information Act (FOIA) because the CWC is a congressional entity and Congress isn’t subject to FOIA. But the public should be able to request from agencies records that those agencies provided to the CWC.

A source told the Wall Street Journal that the “vast majority of the commission's records would put you to sleep.” And that may be true. But until the public has the opportunity to view the documents for ourselves, we can’t be certain of their actual value or use them to make wartime contractors more accountable. We hope Congress takes action to right this wrong by legislating a far shorter seal—or better yet, no seal at all.

There is no good reason to seal the records, and plenty of reasons why the public interest would benefit from making them accessible, especially as the USG ramps up to do even more contracting in both Iraq and Afghanistan.

Congress can reverse this decision. Please write to your representatives.
Posted by TSB at 9:37 AM
Labels: Afghanistan, Commission on Wartime Contracting, Iraq

TSB: Your comments made the Winemaker's Journal Blog! Way to go! gwb

Thanks. I looked at that blog, and - while I don't want to keep harping on the subject - the use of the term "immigrant" when we mean to say "illegal alien" annoys me. All immigrants to the U.S. are legal; they have passports from their home countries and immigrant visas we issued them before they arrived here, and they have resident alien cards we issued after they arrived here.

These farm laborers are illegals; if they weren't, the growers wouldn't find them such a bargain. Calling illegal laborers "immigrants" is a rhetorical tactic that avoids mentioning a big, big, issue.

You're right about that. There is one major company in the area that uses guest workers:Scott McDougall, vice president of McDougall & Sons Inc. of Wenatchee, said the company is in good shape with harvest, partly because it hired 65 workers from Mexico through the federal H-2A guestworker program.

Stemilt and Gebbers Farms are using the H-2A program and Mayer said it has helped prevent a picker shortage.

As of Sept. 18, the state Department of Employment Security had received 42 applications for H-2A workers, compared with 30 a year earlier, Mayer said. The U.S. Department of Agriculture had certified 2,513 H-2A workers for the state, compared with 1,688 a year ago, he said.
THEY ALSO HAVE A PRISON LABOR PROGRAM: http://www.wenatcheeworld.com/news/2011/nov/02/prisoners-help-relieve-picker-shortage/

This is a good post! Wartime secrecy has been the cover for all this contractor abuse. "your representatives" have supported it all the way. There might be lots of info in there that would make people want to put contractors and politicians in jail. Instead of writing to those "chickenhawks" why not just replace them? gwb

GWB, criminal prosecutions are being pursued via special IG operations, and that won't be affected by sealing these records. However, sealing them will keep the public and the news media out of them, and that's just contrary to the idea of open government.

I'm with you all the way on "open and constitutional" government. Elect Ron Paul and we'll have a start. (Obama is toast and those other clowns have no idea even what they were for yesterday!) gwb

Read more: http://www.politico.com/news/stories/1111/67653.html#ixzz1cmBPFKb9
TSB: It looks like being in charge of training Afghan forces is still the toughest job in the Army! And training Karzai to appreciate the US will be even tougher. He is thinking.. You are going to replace me with who?? If you don't like me just quit sending me $$!gwb

TSB: (Fri afternoon stuff) They are putting Hillary in charge of our new "kinder,gentler drone strike program"!
The State Department won greater sway in drone strike decisions; Pakistani leaders to get advance notice about more operations; and the CIA to suspend operations when Pakistani officials visit the US.
THERE MIGHT BE A PETER SELLERS MOVIE IN THIS ONE!
gwb

Good choice! Hillary was born to be the Drone Queen, or Queen of the Drones, or something like that.

TSB: The Colbert Report donated
$450,000 to OWS from his "Colbert
Super Pac" this past week. It's all small donations from his TV show watchers. gwb... also

Sec. Clinton is an innovative genius. "Personality Strikes", not mass casualty strikes will be the new order of the day. I think Condi
is jealous. gwb

TSB: US's post-2014 Afghan agenda falters
By M K Bhadrakumar
http://www.atimes.com/atimes/South_Asia/MK04Df03.html This analysis says the big meet on the Bosporus was a flop. Regional leaders seem to want Af-Pak to pack and leave in 2014. Bonn II in December looks like just another photo op. (Of course they still want us to send $$$ but they will probably be using Chinese drones by then.)gwb