I Love the Smell Of Dip Notes In the Morning 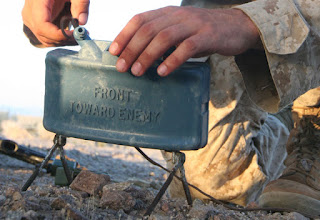 “The real crucial link in the international exchange is the last three feet, which is bridged by personal contact, one person talking to another.”


Maybe Ed didn't know this, but the Claymore anti-personnel mine can do a lot better than three feet. It can extend the maximum range of interpersonal exchange all the way out to 270 yards, although its effectiveness is optimized at 55 yards, where it has a 30 percent chance of making personal contact with anyone standing in a 60-degree horizontal arc to its front.

After the September 11 attack on the U.S. diplomatic mission in Benghazi, I had a conversation with a casual acquaintance who asked me, in all seriousness, why U.S. embassies can't be defended with Claymore mines and concertinas of razor ribbon. Well, he was half right, since we do have razor ribbon in quite a few places. But, anti-personnel land mines? Really?

You might think - I used to think - that the practical, legal, and political consequences of that would be obvious. But, apparently they are not. In fact, I get the definite impression that many people conceive of a diplomatic mission such as the one in Benghazi as a military outpost in a war zone.

Since the September 11 attack in Benghazi, I have come to realize that nearly all of the voting, tax-paying, American public gets its information about embassies and diplomacy from ... oh, I don't know, really bad action movies, maybe.

Public diplomacy ought to start at home. Have there been any realistic depictions of diplomatic missions in American popular media? I can't recall any.

For a realistic depiction, can you specify what the differences in security are between the Libyan consulate recently destroyed and the consulates in, say, Pakistan, Iraq and/or Egpyt?

Having an ambassador killed in a direct assault on a consulate is, in the famous words of Biden, a big f'in deal. So if there is a universal problem we should be fixing it...

Real good post TSB! If the election goes to the R's we might be seeing
"Attack on Benghazi" next spring on HBO. I think Oprah would be good as our UN Ambassador gwb

In fiction they're pictured as nests of spies.

I shall preach to the choir. Traditionally embassy (diplomatic) security relied on two things. 1) The unspoken agreement between countries to respect ambassadors and sovreign territory. 2) That an attack (such as Ben Ghazi) on either constitutes an act of war with all that entails for the host country. To fortify or garrison an embassy is to destroy it's original intent.
On a different note claymores have popular with my family for years (thinning out in-laws at reunions a myriad other tasks about the house).

The kind of attack we saw would work anyplace the host government fails to react for several hours. So, in that sense it is universal. But I wouldn't call that a problem we could fix with more security; that's just the reality of having diplomatic missions in the more sketchy places on earth.

The question is whether we accept that risk, or withdraw. If we have national interests that justify staying despite the risk, we stay. The U.S. government consciously accepts the risk, and the Foreign Service carries out the mission.

The Benghazi attack was really unprecedented. The worst we usually experience is what you saw in Cairo and Khartoum and Tunis - very large mobs, and no host government response for a few hours. We can withstand that kind of attack if we have buildings that we built ourselves to meet security standards. That kind of security is a match for mobs with hand tools, since it can delay the mob long enough for an intervention to eventually take place. That kind of security is not enough when attackers use weapons that are effective against structures, like mortars.

If we start to see more attacks like that one, I think the only solution will be to have fewer missions overseas. Diplomacy requires some minimum of peace. If we have to be at war with locals who enter our property, then we need to rethink why we're there.

The Iranians operate the Den of Spies Museum in the former U.S. embassy in Tehran. They might be on to something.

That agreement is written - the Vienna Convention on Diplomatic Relations. States that receive foreign diplomatic missions are obliged to protect the mission facilities and staff. Sometimes they are unable to do so, maybe temporarily, and sometimes they are unwilling to do so. When that happens, like it did in Tunis, Khartoum, Cairo, Benghazi, etc., we have to consider how we respond.

Acts of war are a problem, because wars are between states and our attackers are usually sub-state actors like al Qaeda. I don't know how we go to war against a fuzzy group like the Ansar al Sharia militia. So far, the only act of retaliation against them for the Benghazi attack was carried out by a mob of Libyans who killed a dozen of them and forced them to withdraw from Benghazi. That might be all the payback they get.

GWB: we might see an attack on Benghazi sooner than that. How far has Obama fallen in the Ohio polls?

TSB:I meant the "act of war" was used more as a threat to the host country to police their own. Of course that's not always possible, but it definitely was there. You're right about Vienna, I had forgotten. The idea though is quite old, the Romans and Mongols were so adamant about it that they were known to hold sometimes 3 or even 4 press conference after a violation.

The Romans were the best! If we had a SecState like Julius Caesar, our problems in Libya would be over very quickly.

Back then, before nation-states and treaties, they conducted negotiations by exchanging hostages. In fact, the word "negotiator" back then meant hostage. Julius Caesar used it in that sense in Gallic Wars.

Hey TSB, Is that your canon? gwb

GWB: I live in the free state of Virginia, where owning light artillery is not a crime. Those guys were busted over a bunch of .22 pistols, from the looks of it. This is exactly why I avoid New York City; where my Glock is unwelcome, I'm unwelcome.

Right, but is that the same kind of canon? gwb

TSB: The Romans were never famous for apology tours. Nor were they overly concerned with force protection.

GWB: do you mean the saluting cannon I wanted to get for Washington's Birthday? No, I haven't found one of those yet. They are very small - look like toys - but were used by ships to signal in ports and they sound like a full-size piece.

If those New York guys have one for sale, I might overcome my objections to going there.

Right. The Romans left a lasting impression on Carthage. That's near Libya, I think. Or anyway, it was.

TSB: Did you notice they killed the head of security (x20 years) at the US embassy in Yemen. On his way home from work. gwb

TSB: This one reminds me of what Colbert did to GWB at the White House Correspondents dinner. gwb

'If four Americans get killed, it's not OPTIMAL': Obama's extraordinary response to Comedy Central question about fiasco after Benghazi attack

By Toby Harnden In Washington

GWB: "Not optimal." That will come back to haunt him.

It's a pity about the local employee in Yemen. Any Yemeni who would work for us in the first place is very unusual. The locally engaged staff overseas is the backbone of our foreign missions.

"If you see something, say something".... Note to Hillary and Obama: I'm just sayin. gwb

"The locally engaged staff overseas is the backbone of our foreign missions." And top of the list of targets of U. S. enemies.

TSB:Today is the 25th anniversary of the "87 crash". Every 5 years since then has marked an important high in stock market. Is this the October Surprise? (stock market throws an anti-obama fit?) gwb

TSB: Billy Graham endorses Mitt Romney; Removes Mormons from his list of cults! Hey! What about my cult? I'll promise him a tax cut! gwb

TSB: This Issa "doc dump" on Libya is great! gwb

GWB: the document dump is pretty good, except for the Libyan names that weren't redacted. The political effect would have been even better if the Committee had asked for a pre-dump review by State, since that would have gotten the administration's fingerprints on the decision to release.

From what I see online, most people commenting about the documents haven't read them but are just going off of theTom Clancy movie that's running in their minds. All about fantasy military interventions, etc.

The Monday debate will be a little livelier than otherwise, I suppose.

TSB:"The Benghazi Embarrassment" was a good piece reflecting I think your view that if we insist on promoting "our interests" in dangerous places we should protect them. Obviously "our interests" are too many; never clearly stated;
and tend to lead to disastrous results. (eg. the middle east and south asia) Notice the CIA never comes up in polite political circles. Of course the "race" is a tossup. What's to choose when nobody ever turns the lights on in the showroom? gwb

The CIA? What's that? And when was the last time anyone saw Director of the CIA General Petraeus? He must be deep, deep, deep, deep undercover these days.

How about stinger grenades, flash-bangs and baton rounds? Not to mention live ammunition. The false dichotomy of overkill or surrender has to end.

They have some of that (although foreign police in the Third World don't do less-than-lethal much, and the mobs there are not impressed by it). Tear gas has been pretty successful. But it all depends on an eventual response by the host government, or else an evacuation if possible.

By 1988-9 Fiski was the only correspondent left in Beirut except for a woman for the FTimes. He was the only one getting a few cards and messages between Anderson and his family to the end... and he didn't even like the guy who he labeled reckless and abrasive from the beginning. Fisk dealt with and reported on every player in Lebanon with only a pen, his wits and his integrity. gwb
gwb