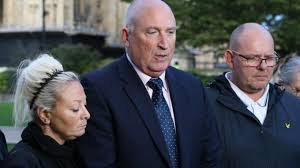 At least one good thing seems to have come out of the Dunn family's meeting at the White House this week. Although they refused to meet the woman who was at fault in the crash that killed their son, it may be that they are now ready to accept the fact that they will not get her back to the UK for any kind of judicial process.

Charlotte Charles, the mother of Harry Dunn: "If I'm totally honest, I don't hold out too much hope that she's going to be returned to us."

Nevertheless, their family lawyer / spokesman is doing his best to keep false hopes raised, it seems, by relying on the extremely bad information he's getting from activist-lawyer Mark Stephens. To summarize Stephens: the driver never had diplomatic immunity because neither she nor her husband are named in the UK's Diplomatic List, and aren't "diplomatic agents;" plus, diplomatic status only applies to diplomats posted to London; and anyway, diplomatic immunity is always waived when the receiving state so requests (there is literally no case in which it isn't!); and, if all that fails, she lost her immunity when she left the country, so we can extradite her back to the UK now and put her on trial.

Regarding those 'routine' waivers of immunity, you might think that a British lawyer would remember one of the most striking cases ever of diplomatic immunity, which occurred in London in 1984 - the murder of Woman Police Constable Yvonne Fletcher by someone shooting from inside the Libyan embassy. The occupants of the embassy were allowed to leave the UK unhindered, and their bags weren't even searched for the murder weapon. What happened to that waiver?

It happens not infrequently that diplomats leave the jurisdiction after causing fatal traffic accidents. Last year, a U.S. military attache left Pakistan under exactly those circumstances.

As for extradition, obviously, that will be refused. It isn't even clear whether the UK could declare the driver a fugitive and try to extradite her from a third country so long as they would be unable to prosecute her due to her immunity.

Most aggravatingly of all, the simple facts of who gets diplomatic immunity are spelled out in black and white and are perfectly clear to anyone who cares to read the Vienna Convention on Diplomatic and Consular Relations.

Here are the key excerpts:

The person of a diplomatic agent shall be inviolable. He shall not be liable to any form of arrest or detention.

A diplomatic agent shall enjoy immunity from the criminal jurisdiction of the receiving State.

The members of the family of a diplomatic agent forming part of his household shall, if they are not nationals of the receiving State, enjoy the privileges and immunities specified in articles 29 to 36.

Members of the administrative and technical staff of the mission, together with members of their families forming part of their respective households, shall, if they are not nationals of or permanently resident in the receiving State, enjoy the privileges and immunities specified in articles 29 to 35, except that the immunity from civil and administrative jurisdiction of the receiving State specified in paragraph 1 of article 31 shall not extend to acts performed outside the course of their duties.


To recap, the American driver is - so far as I can tell from the public record - evidently the family member of a technical and administrative staffer, or else someone with equivalent immunity via special bilateral agreement, and for that reason immune from the criminal jurisdiction of the UK.

The Dunn family may have a cause for civil action, but that's all.

The family's lawyer ought to read the Vienna Convention and see if he can find a loophole. At least that would be honest labor.

TSB: As the curtain closes on a historic corruption case, the 2020 election heats up. 38 people cited for violations in Clinton email probe
By MATTHEW LEE and MARY CLARE JALONICK, Associated Press 1 hr ago

It's no wonder nobody sweated the Epstein case, the whole swamp supported the guy and anyone wanting in the club better not say anything either. The Clintons have been masterful in using the media to achieve total power over the DNC and the media over a 40 year span. Most voters either hate them or think they never did anything wrong. Truth is though, despite only losing 1 election Hillary has done very little to deserve all the votes she got. Much worse for the millions of people around the world from her "humanitarian wars". I have a feeling though that Tulsi could be her Waterloo. https://www.msn.com/en-us/news/politics/gabbard-hits-back-at-queen-of-warmongers-clinton/ar-AAIZRs9?ocid=spartanntp gwb

Who knows? HRC might come to regret the day she launched this delusional attack on Tulsi. It could become her Sunset Boulevard moment:"I'm ready for my Presidential portrait, Mr. DeMille."