ISIS Brides Do Their Little Turn On the Catwalk 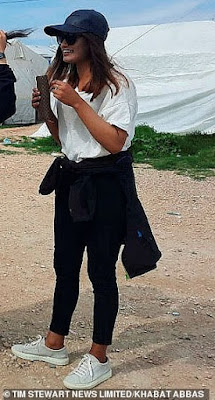 Yes! I thought so. The ISIS Brides are definitely going for public acceptance via new clothes and - oddly, I think - ball caps.
Here's a story about a newly westernized French ISIS Bride:

Emilie Konig, 36, was pictured in her new westernised garb at the al-Roj camp in northern Syria in recent days - the same camp where Begum is being held - as she tries to convince people she is no longer radicalized so she can return to France.
Gone was the heavy black niqab, gloves and abaya robe that she previously wore - even while living in France - and in its place she wore a hooded sweatshirt, sunglasses, faux leather leggings, white hi-top trainers and a shoulder bag.
Her head was covered with a Yankees baseball cap, with her hair hanging down her shoulder in a plait.
The look mirrors that of Begum, who first appeared in interviews from Syria dressed in a black hijab and abaya robe - but recently swapped them for a baseball cap, sunglasses, hoodie, white blouse, black jeans and white Converse-style trainers.
Begum, like Konig, adopted the look while trying to convince people she no longer poses a danger so she can return to Britain, which has stripped her of her citizenship because of her membership in ISIS.
Eilish O’Gara, a counter-terrorism analyst with the Henry Jackson Society, previously theorised that the outfit is 'a soft tactic' devised by Begum's lawyers designed to 'win back the hearts and minds of the British public'.

Just "a soft tactic." But, I'm telling you, it's a tactic that is likely to work.
Posted by TSB at 2:59 PM
Labels: ISIS Brides

TSB: Speaking of the good, the bad and the ugly I am a rabid anti-yankees fan.
I noticed for the first time: GOP Reps. SUE Nancy Pelosi for metal detectors outside Congress: The main effect of this rule is it prevents R members from voting and then fines them for ignoring it. (a clear violation of the 27th amendment that states such fines cannot be levied until after the next election.) By eliminating R votes Pelosi is able to pass any legislation she wants to promote "Unity". gwb
https://youtu.be/D-RqVtPGIak

GWB: I think the GOP members are free to enter and vote, they just have to leave their firearms elsewhere, such as in their offices (which is perfectly legal).

How much personal protection does a Representative need on Capitol Hill anyway? Not much, I don't suppose, although there WAS that time Puerto Rican Nationalists fired down on them from the public gallery.

Personally, I avoid DC like the plague (which I can do because I work on the Virginia side of the river and not in DC itself) since it isn't practical to carry a concealed weapon there. It actually IS legal to do so with a DC-issued permit, but they ban carry from pretty much every building plus public transportation, so why bother? Where my Glock is not welcome, I'm not welcome.

TSB: Happy Fathers Day! I got a video from my daughter (working on the homestead in Idaho) and a popcorn popper!
gwb

TSB: This weekend was the Republican Conservative Christian Conference in Colorado. (I never heard of it before.) It was a very informal folksy 2 day event at a Christian College with the Keynote Speaker Ron DeSantis and also Pam Bondi, his attorney general. They had a straw vote of about 25 possible R candidates for President in 2024. De Santis won convincingly over Trump and all others.
Professional governing and honest elections seems to have a lot of appeal these days among conservatives. I see that Biden called a meeting of the plunge protection team this weekend after his triumphant summit meeting with Putin. Sounds like turnout is VERY low in NYC Mayor race? gwb

Florida and Texas both have Republican governors with very good shots at a nomination in 2024, so that race is heating up nicely.

I agree about NYC. There is seemingly little interest, even though Curtis Sliwa - my choice!! - is the kind who can normally generate public interest. Yang is a weird guy, a Californian and failed presidential primary candidate with no New York base at all, although he IS speaking a lot of sense on the demented street freak problem.

TSB: Joe Biden DOJ Nominee Worked Alongside Hunter Biden At Law Firm Representing Burisma I thought Hunter Biden was a famous artist like George Bush?
I am being persuaded that Americas basic problem is drugs, starting with marijuana (for which there have been no long term studies.) I'm told today's MJ
is 100's of times stronger than 50 yrs ago. It seems to have the long term effect of arrested development and the need for more and more THC. Now all street drugs are essentially legal in the blue states. I include most of the legal drugs as well. gwb

TSB: Fun fact: Amazon in the UK has been found by a whistleblower/leaked video
to be trashing or burning 130,000 brand new or returned items WEEKLY at one of it's fulfillment centers. Imagine hou much waste and pollution that might be if they are doing it world wide. Of course they denied it and have a big advertising campaign about how Green they are going to be someday and Bezos was asking for a 10 Billion handout from DC last week for Blue Horizon. gwb

GWB: The Amazon thing is probably a case of destruction as the least costly way to handle that stream of products. If it costs x to destroy returned or overstock items and 2x to handle them in some more complicated way, then off they go to be incinerated.

TSB: US Govt Seizes News Websites Across MidEast, Including Iran's PressTV
I'm not sure what "misinformation" is but it's starting to look like shutting down the internet "to protect our "values and interests" is something we share with N.Korea, Fauci, FB and Dorsey. gwb
https://www.zerohedge.com/geopolitical/end-global-internet-us-govt-seizes-news-websites-across-mideast
I'm hearing that Iran was buying nukes from Pakistan in the 90's and that George HW Bush shared Nuke tech with China when he was President. I think that would now be called disinformation even if it's true. I'm expecting some incoming hypersonic missiles soon... from our allies the Chinese.

TSB: Has the First Lady been taking "Giggle Advice" from the VP? Seems Tennessee has a 17% vaccination rate so she took a special trip to encourage them: https://www.the-sun.com/news/3142111/jill-biden-booed-nashville-tennessee-vaccination-rates/ gwb

GWB: Tennessee reports about 35% fully vaccinated and about 45% partially. "Doctor" (of Education) Jill should save her efforts for other causes, I think, and maybe keep her travel to bluer places where she can expect a warmer welcome.