Those Were the Times That Tried Men's Souls, 233 Years Ago 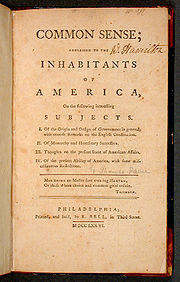 Published anonymously (due to its treasonous content) on January 10th, 1776, Thomas Paine's 43-page pamphlet, Common Sense, became one of the foundational documents of the early American Republic, and of the modern American mind as well.

Paine said in a later treatise that "the moral principle of revolutions is to instruct, not to destroy." And instruct he did, in a long series of works that influenced both the American and French Revolutions. But he never did it better than with his first pamphlet. You may judge how much influence Common Sense had on contemporary events by the fact that it sold 500,000 copies during 1776 alone, when there were only 2.5 million people living in all 13 colonies.

Has any other piece of propaganda [and I use that word non-pejoratively, since I think it's more forthright than the rather euphemistic P-word synonyms that replaced it, e.g., psychological operations, political warfare, perception management, or even public diplomacy] since 1776 been remotely as successful?
Posted by TSB at 10:43 AM
Labels: American Revolution, Thomas Paine

I'm a fifth-grade teacher, and an intrical part of teaching civics is providing students with our primary sources: the founding documents. This is critical in understanding what “We the People” really means. Today, as they did over 230 years ago, those documents instill in students the belief that all our voices are important. Everyone of our citizens are given the right to pursue liberty. Futures do not have to be inevitable and "Little voices" can make dramatic impacts on events. That is Thomas Paine's greatest contribution to our country. His pamphlet, Common Sense, spoke to ALL the voices in the 13 colonies during a time of great fear and indecision. He gave a vast number of citizens a vision of what each could do, 176 days before the Declaration of Independence. A belief that power should radiate from the citizens. That message is still paramount to all our students today. For that pamphlet alone, Paine needs to be recognized everywhere as a intrical part of the American miracle.

Mark Wilensky,
author of "The Elementary Common Sense of Thomas Paine: An Interactive Adaptation for All Ages"
www.NewCommonSenseBook.com

How about ol' Roosevelt's "Four Freedoms" address? If I am remembering my history correctly, his four freedoms defined a generation- and it was an actual peice of propoganda, as it was distributed and produced by the government. (Not so with Common Sense I believe.)

Hi. That's an interesting point. The Four Freedoms (see the whole FDR speech at: http://www.feri.org/common/news/details.cfm?QID=2089&clientid=11005) was certainly intended to promote his agenda in January 1941, which he fleshed out a little further a few months latr in the Atlantic Charter. It wasn’t successful at moving national opinion vis-à-vis entering the war, however. Too abstract and utopian, I expect.

But the FF did result in terrific propaganda art by Norman Rockwell; check out his four paintings that illustrated each of the freedoms. Those effected popular culture much more than FDR's rhetoric, I think, albeit still not enough to persuade Americans away from neutrality.