U.S. Dials Down the Public Messages in Havana 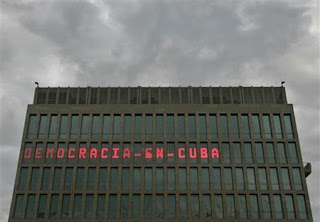 Reuters is running a story on an interesting development at the U.S. Interest Section in Havana, Cuba: U.S. turns off news ticker that angered Havana.

A few quotes from the story.

HAVANA (Reuters) - The United States has turned off a news ticker at its diplomatic mission in Havana that had long irritated the Cuban government, in another sign of efforts to improve relations with Havana, western diplomats said.

The ticker, which streamed news, political statements and messages blaming Cuba's problems on the country's communist system and socialist economy, had infuriated former President Fidel Castro when it was turned on in January 2006 at a moment of high political tension with Washington. President Raul Castro took over from ailing elder brother Fidel last year.

Throughout most of July, the five-foot-high (1.5-meter high) news streamer which ran across 25 windows on the fifth floor of the U.S. Interests Section, has been turned off.

Western diplomats in Havana, who asked not to be identified, said there were no plans for its crimson letters to be switched on again any time soon.

Neither U.S. diplomats nor Cuban officials were immediately available for comment. U.S. diplomats had told visitors there were "technical difficulties" with the electronic messenger, which in June appeared to sputter at times.

When the news ticker was started in 2006, the Cuban regime was sufficiently agitated by it that they dug up the parking lot in front of the building and built an "Anti-imperialism Park" there with a phalanx of 100-foot high flagpoles and anti-U.S. themed billboards to block public views of the Interest Section.

The Financial Times also ran a story on this today, and quoted a "western diplomat" who pointed out that the billboard shut-down signals a likely U.S.-Cuba rapprochement:

“That they turned off the ticker is important – and that nobody has noticed is significant, too,” a western diplomat said.

“The Cubans could have howled victory – but [they] said nothing, indicating they are serious about improving relations.”