Fall of the Wall Anniversary 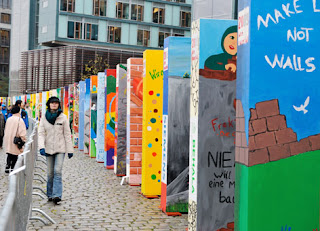 The UK Daily Telegraph is not giving President Obama a pass for declining Angela Merkel's invitation to attend the ceremonies marking the 20th anniversary of the fall of the Berlin Wall: Not enough about him? Barack Obama skips Berlin Wall ceremonies. Ouch!

The ceremonies sounded like lots of fun. I loved the idea of having Lech Walesa push over the first of 1,000 big dominoes (photo above) set up where the Wall once stood.

Personally, I have been marking the occasion by playing the old David Bowie song Heroes. That might seem an odd choice, but the song was kinda sorta inspired by the Wall and it's got an appropriately triumphant sound.