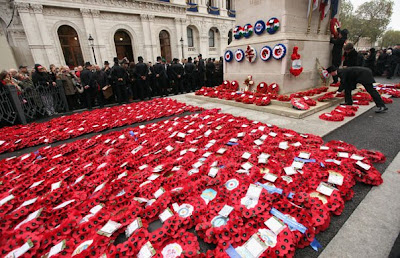 I wish I could embed these videos but the BBC doesn't allow it, so here are links (here and here) to the key events at today's Remembrance Sunday ceremony in London.

Big Ben chimes at 11 o'clock and a 2-minute silence is observed, ended by a single cannon shot followed by the playing of Last Post by the Royal Marine buglers. Dignitaries, led by Queen Elizabeth, then lay wreaths of poppies at the Cenotaph in Whitehall. It's a powerful ceremony.

I wish we had something like it. This week we Americans will observe Veterans Day, which began in 1919 as Armistice Day, our equivalent to Remembrance Day, before it was renamed in 1954 to include all veterans. In May, we observe Memorial Day to commemorate U.S. troops who died in military service. If we combined the two holidays and added a large measure of tradition and ritual, that would be roughly equivalent to Remembrance Sunday.

The British still do pomp and ceremony better than anyone else.
Posted by TSB at 1:54 PM
Labels: Remembrance Sunday