The Afghanization of Mexico Continues


A Mexican narco group employed a carbomb - pardon me, I mean a vehicle-borne improvised explosive device, or VBIED, to use the clumsy phrase that all the experts prefer - in a complex attack on police in Ciudad Juárez last night. It wasn't much of a bomb, at least not by Middle Eastern standards, but it was a very big escalation in the war the narco groups are conducting against state authorities in Mexico. The use of explosives, and, even more ominously, the use of guerrilla warfare tactics (shooting a police officer in order to draw in response forces who were then attacked with the VBIED), marks a further militarization of the conflict.

At some point, a crime wave is no longer merely crime but war, and our neighbor to the south has passed that point.

An explosive blasted Mexican federal police and rescuers when it detonated as they went to the aid of a wounded police officer in Juárez on Thursday night.

Authorities said it had not been determined if the blast was caused by a grenade or a car bomb, but the attack appeared to follow the tactics of terrorists in the Middle East.

The attack occurred about 8 p.m. near the intersection of Bolivia and 16 de Septiembre streets in downtown Juárez. First, a municipal police officer was shot and killed, and when federal police arrived to the scene there was an explosion, an official said, citing initial information.

Seven to 10 people were injured, including a cameraman for Channel 5.

Footage from Channel 26-KINT (cable Channel 2) showed a street covered in debris. Something appeared to be in flames. A uniformed police officer lay dead and a man sat on the street bleeding heavily and holding his head.

Late Thursday night, police said the blast was in retaliation for the arrest of a cartel leader.

Graffiti later appeared on a wall stating, "What happend on 16 (de Septiembre avenue) will keep happening to all the authorities who keep supporting El Chapo. Sincerely - the Juarez cartel. We still have car bombs."

The use of explosives, including the possibility of a car bomb, would be an escalation in a drug war that has bloodied Juárez for more than two years. The use of car bombs by narco-traffickers is not unprecedented since they had been used in Colombia by drug cartels in that nation.

Federal police earlier this year replaced Mexican army soldiers patrolling the city. Patrols are regularly done in groups of at least two vehicles, with several officers in each armed with assault rifles.

There were eight homicides Wednesday in Juárez. More than 1,500 people have been slain in Juárez this year, and more than 5,700 people have died since 2008.

The Sinaloa and Juárez drug cartels have been fighting over lucrative smuggling corridors into the United States. It is not uncommon for drug traffickers to target police claiming they are working for rival groups.

Those numbers are staggering. More than 1,500 people killed in Ciudad Juárez this year?? Are there any cities in Afghanistan that have had that many killed this year? Or in the past ten years? I think not.

The only silver lining in this cloud is the small and primitive nature of the VBIED. In the post-blast videos I've seen there was almost no damage done to the structures surrounding the site of the bomb, even though some of them were only a few feet away. Here's a tip: you can get a sense of the size and efficiency of a bomb blast by looking at the damage it did to surrounding objects, and in particular, from the transition zones where one type of damage ends and a lesser type begins. For example, if you see windows shattered and blown out of their frames for 100 feet in all directions around the site of the blast, but windows more than 100 feet away are only cracked and retained in the frames, then there was a transition zone at 100 feet that can be a useful clue to assessing the size of the blast.

In this case, the blast appears to have been puny. There is no structural damage evident in the masonry buildings a few feet away from the blast, metal shutters on stores are intact, no street signs are blown away or even bent, windows are shattered but I see one part of a storefront glazing still hanging on to its frame. Bits of the vehicle that carried the bomb are scattered around the street and those were no doubt dangerous shrapnel, however, I saw no indication of fragmentation added to enhance the anti-personnel effect of the bomb, such as nails or ball bearings embedded in the walls of surrounding buildings.

I would guess that this means the narcos lack the expertise with explosives that has been acquired by more established Mexican insurgent groups such as the Popular Revolutionary Army (see this) and so they face a long learning curve before their VBIEDs can become a major threat.

Update: A Mexican Army spokesman has given a statement to the press with some more information:

The blast tore through an intersection in Ciudad Juarez across the border from El Paso, Texas, late on Thursday in what the security ministry said was retaliation for the arrest of a drug cartel boss.

"There were 10 kilos (22-pounds) of explosives, activated from a distance by a cell phone," Enrique Torres, spokesman for the army in Ciudad Juarez, told Reuters.

The cell phone makes sense, since there is no indication of a suicide bomber, but I don't believe the estimated size of the bomb. Check out the photo below. Those overhead street lights would not still be intact and working after a 22-pound bomb blast from below. 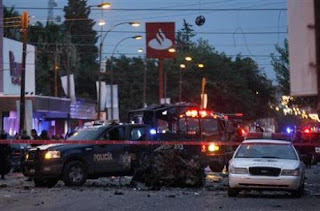