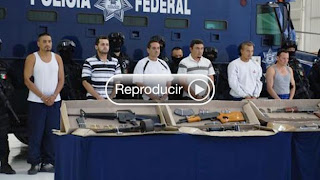 CNN Mexico is reporting that Mexican Federal police have made another arrest in the murder of an employee of U.S. Consulate Ciudad Juarez, her husband, and the spouse of another employee, last March.

The very brief and sketchy report is here, and you can see more in the CNN Mexico video report (in Spanish) here.

Mexican authorities have arrested a drug gang suspect accused of planning the shooting deaths in March of three people connected with the U.S. consulate in Ciudad Juarez and participating in the killings of 13 teens at a party in the city a month earlier, federal police said Friday.

The 13 dead people at the January party were mistakenly believed to belong to a rival drug gang, Pequeno said.

Update - CBS News is running a story (here) quoting Mexican federal police as to the motive for the murder of Lesley Redelfs.

The purported motive makes no sense. Lesley Redelfs was a locally engaged employee and therefore did not issue or approve visas. Moreover, she was, I believe, assigned to the American Citizen Services section of the consulate. That doesn't mean she might not have been solicited by drug cartels. As a dual U.S.-Mexican national, she might, in fact, have been the target of their special interest. But she could not issue anyone visas, so the miscreant now under arrest in Mexico is making up a story.

A drug gang leader says he ordered the killing of a U.S. consulate worker because she gave visas to a rival gang in the border city of Ciudad Juarez, Mexico, federal police said Friday.

Jesus Ernesto Chavez, whose arrest was announced on Friday, leads a band of hit men for a street gang tied to the Juarez cartel, said Ramon Pequeno, the head of anti-narcotics for the Federal Police.

Pequeno said Chavez ordered the March 13 attack that killed U.S. consulate employee Lesley Enriquez and her husband as they drove in the violent border city, and he said Chavez told police that Enriquez was targeted because she gave visas to a rival gang.

A U.S. Embassy official said there would no immediate comment on the allegation.

Enriquez, who was four months pregnant, and her husband, Arthur H. Redelfs, were killed when gunmen opened fire on their sport utility vehicle after they left a birthday party. Their 7-month-old daughter was found wailing in the back of the vehicle.

Jorge Alberto Salcido, the husband of a Mexican employee of the consulate, also was killed by gunmen after leaving the same event in a separate vehicle.

President Barack Obama expressed outrage over the killings at the time, and Mexican President Felipe Calderon said he was indignant and promised a swift investigation.

Chavez told police that gunmen opened fire on Salcido because the two cars were the same color and the hit men didn't know which one Enriquez was in, Pequeno said.

TSB Note: It is preposterous to claim that the cartel gunmen fired into Salcido's car out of confusion. Multiple gunmen stopped Salcido's car before firing into it with AK-47s, so they had plenty of opportunity to see who was inside. If Chavez's story was correct, they knew they were looking for a woman, but there were no women in that car, just an adult male and three young children.

Pequeno said Chavez belongs to Barrio Azteca, a gang that works for the Juarez cartel on both sides of the border.

The State Department has authorized U.S. government employees at Ciudad Juarez and five other U.S. consulates in northern Mexico to send their family members out of the area because of concerns about rising drug violence. The cities are Tijuana, Nogales, Nuevo Laredo, Monterrey and Matamoros.

While most other news media are merely repeating statements coming from Mexico concerning the motive for the murders - despite the evident absurdity of that motive - at least the New York Times is being responsible (here):

The Mexican police said Friday that they had arrested a gang leader who confessed to ordering some of the most horrifying killings in the border city of Ciudad Juárez, including the killing of a pregnant American consular employee and her husband.

Jesús Ernesto Chávez Castillo, 41, confessed that he ordered the murder of Lesley A. Enriquez at the command of La Linea, the enforcement arm of the Juárez drug cartel, the federal police said. The motive, he said, was revenge, because the consulate had issued visas to members of a rival gang.

Mr. Chávez’s story — that Ms. Enriquez’s killing had been ordered because she helped members of a rival gang obtain visas — contradicts both her official job description and the motive offered by another suspect.

American officials have said that Ms. Enriquez worked in the office that helps United States citizens and had no authority over visas.

I guess the NYT really is the newspaper of record.
Posted by TSB at 8:50 AM
Labels: Lesley Enriquez Redelfs, U.S. Consulate Ciudad Juarez

I also read differing reports of the people killed at the drug rehab center, which was apparently a retaliation job they now say (from what the arrested have told them). Some reports said 7 of the people killed were members of Los Aztecas gang, while another report said 17.

Also, previously it was widely assumed the rehab center was targeted because they help drug addicts, which is clearly bad for business if you're a drug seller. Rehab centers are a dangerous business in Mexico, common knowledge.

I think you're right. Police say that the cartels exploit rehab centers to recruit hit men and smugglers.

There have been so many attacks on rehab centers that I can't keep them straight. Here's what I found after a quick search:

June 26, in Gomez Palacio (Durango), nine were killed during a rehab center invasion

June 10, in Chihuahua, 19 killed at the Faith and Life rehab

March 2009, 20 were killed at another Ciudad Juarez drug center