Who Do We Pay? 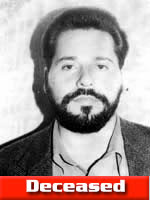 The U.S. State Department might owe someone up to $5 million, which is the reward it offered for the Mexican bandito Ignacio Coronel-Villareal, also known as "Nacho Coronel," and sometimes called "the King of Crystal" because he ruled methamphetamine trafficking from Mexico to the United States.

Mexican authorities caught up with Nacho outside Guadalajara yesterday:

Mexican troops have killed a top drug kingpin known as the "King of Crystal," in a shootout as he tried to escape from a wealthy suburban hideout. His death is a rare victory for President Felipe Calderon's struggling war on drug cartels and organized crime.

Meanwhile, dozens of police officers in the Mexican border city of Tijuana have been arrested in an anti-corruption sweep, and 15 bodies with marks of torture were discovered just over the border from Brownsville, Texas. The U.S. Consulate in Ciudad Juarez, where drug hit men were blamed for killing three people connected to the consulate in March, abruptly closed today [TSB note: that's now yesterday, July 30] for security reasons. It's unclear whether any of the developments are related.

In my opinion, it is entirely possible that some of those developments might indeed have been related.

p.s. - I might have accidentally deleted a comment I received last night concerning the late Nacho Coronel. At least, I can't find that comment posted today. My apologies.
Posted by TSB at 9:41 AM
Labels: Narcotics Rewards Program

No need to apologize; it wasn't deleted - just very brief due to a long day.

Updated commentary: Coronel's nephew Mario Carrasco Coronel, "possible successor," was also killed in later raids. Incidentally, Coronel is referred to as "No. 3" per the HuffPo article. Nephews of DTO leaders and #3s should take note.

Another Number 3! It seems both al-Qaeda and Mexican DTOs have the same middle management mortality problem.