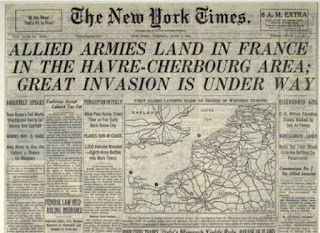 These radio broadcasts are totally fascinating, and not least for the sharp contrast they make between the dry professionalism of newsmen back in that day versus the shallow show-biz of today's news media.

The news started at midnight, when German radio first reported attacks in Normandy. At 3AM, Eisenhower's HQ released Communique #1 officially announcing the invasion. CBC updated the story throughout the day as Americans were waking up to the news. It ends with a re-broadcast of the 8AM news from London on June 7, by which time the BBC was reporting on the success of the invasion, and the advance of Allied troops several miles past the beaches.

Listen to it at the Internet Archive here: Complete Broadcast Day D-Day.

So far today, the State Department Twitter account has noticed the occasion of June 6. Neither the White House nor Obama's own account have, and I don't expect that they will.

Good post TSB! I'll get to it when I get past the 'weekend working man's blues'. gwb