U.S. Ambassador to Cambodia Has A Surprise Houseguest 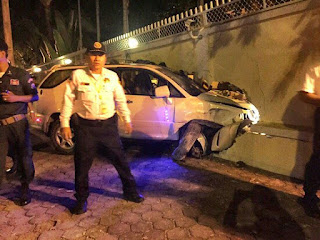 According to Cambodian Expats Online, a local driver ran his car into the perimeter wall that surrounds the residence of U.S. Ambassador to Cambodia William Todd on Tuesday night. CEO provided the photo of the accident scene, and there are more at the link below.

I'd say the vehicle is in better shape than the wall. Yea, Lexus!

Here's the news item, which is so far not confirmed by any official source that I've seen today, Lexus Crashes into US Ambassador William Todd's House in Phnom Penh:


A man driving a white Lexus RX300 has crashed into the residence of US Ambassador William E. Todd on Norodom Blvd Tuesday night, June 9, 2015.

It is not known what caused the accident.

William Todd has been the United States Ambassador to Cambodia since March 29, 2012.


If the driver was wearing his seat belt, he probably walked - or staggered - away from that one.

TSB: I told you whatever Congress might do to reign in NSA Obama would reverse with a secret order. Anyone who thinks it makes any difference who the President is or what party wins is dreaming. gwb
http://www.zerohedge.com/news/2015-06-09/obama-goes-full-stalin-tells-secret-court-ignore-law-he-signed-4-hours-earlier-exten

TSB: I just found out why our representatives in DC have seemingly ignored the 'EMP' threat to the electric grid. At least 5 plans have been proposed and the cheapest, most minimal one ($300 million) passed the House easily but has been held up in the Senate by a single (secret) senator. The electric lobby doesn't want to pay for it or let the government (FERC) have ANY regulatory authority over them! I can live without a phone but not electricity. gwb
http://www.zerohedge.com/news/2015-06-09/former-cia-director-were-not-doing-nearly-enough-protect-against-emp-threat

TSB: You 'East Coasters' better enjoy your seafood while you can still afford it. It looks like the big (mysterious) dieoffs of baby seals, glow in the dark blue fin tuna and various other fish is going to get a zillion times worse by next year. gwb Thailand is looking better all the time!
http://www.zerohedge.com/news/2015-06-10/west-coast-north-america-be-slammed-2016-80-much-fukushima-radiation-japan

http://www.theguardian.com/football/2015/jun/11/fifa-communications-head-walter-de-gregorio-resigns
TSB: There is 'spokesperson' opening at FIFA. I guess even a good joke is trouble when your boss and the whole organization is totally corrupt. Made me think of Marie.. I mean, look at those POM POMS!! gwb http://www.skepticalbureaucrat.blogspot.com/2015/04/cheer-up-marie-everything-will-turn-out.html

GWB: I do like my seafood, so I hope that radiation simmers down

TSB; James: My hero, Charles Bowden (Down By The River, Murder City) died last Aug 30 at age 69. Bowden spent 13 yrs studying Juarez and the Mexican border area problems. Other than the US media, no one ever tried to silence him. The US government has now publicly revealed that a number of the biggest US banks have been laundering drug money with impunity for years. That will continue because $28 billion a year by HSBC only merited a small fine.

From Bowden we know that Amaro Carillo took over the Juarez Cartel in 1990 and until his death in 1997 he owned the Mexican government, Mexican military,Mexican Federales,Mexican FBI,Juarez police. In 1990 Carillo was taking in $250 million a day in sales and all the cocaine came in his own airline of large jets parked at the Juarez airport. Name one US politician who has ever said a word about this?

One reason I like my job is that I get to spend one hour with all kinds of people of all ages. The drug users outnumber the alcoholics at least 5/1. The young people (say around 20-30) say drug use is rampant, prices are low.
Wikipedia on Bowden says nothing about any of this but I'm going to read all of his works for the past 50 years. He was once employed by the NYT BOOK REVIEW, Harpers, GQ, Mother Jones. RIP! gwb PS: Carillo's race horse was named 'Silencio' sort of a Stalinist concept.

TSB: The Cesium 134 half-life is just 2 years. That is the type from Fukushima. Cesium 137 from nuclear testing has a half life of 20 yrs. We will be hearing a lot more in the next 6 months about this because Japan's current plan is to dump all the radioactive water in the ocean and ship it to us. It really hasn't reached closer than 50 to 100 miles yet.Early indications are that the smaller fish that seals eat are dying off first. gwb

TSB: Today I woke up thinking about the 30 year cycle of dictators we have killed after they had worked for us. Saddam vs Iran, Mubarek "he's no dictator-shut up Joe" and Egypt, Saudi Arabia King and Bush and Obama, Mexico and the war on drugs,

Pakistan and Khan and The Bomb' Iran and Bomb,Bomb,Bomb Iran from 1952 til John McCain Resigna, Vietnam, which half the country thinks we won.

The point is that this... LIKE ALL AMERICAN HISTORY is based on lies, distorted narratives, heroes that weren't etc. A deeper understanding of Juarez shows you the results of the promises of the 1980's crowd like Bush senior, Clintons. If you get a long enough look at it you can see where this country is headed...and fast!

So Hillary isn't hiding from reporters just to win an election. She is just re-running the the tricks of her husbands campaigns because like in Mexico: If you know what's going on you have 2 choices: Silence: or an untimely ending. gwb (AKA silencio-sorry that was Carrillo Fuentes) Bush will be talking in Spanish a lot just like what's her name Rep D California talks in baby talk and Jaime Herrera-Butler gets elected here without ever mentioning she is a R.) Whattacountry!!