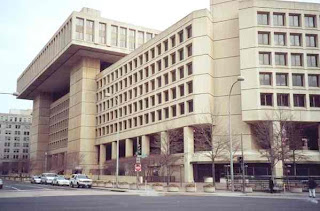 The Washington Post ran a good opinion piece yesterday by a local community organizer - well, the executive director of the Downtown Cluster of Congregations - calling for the demolition of the ugly and dysfunctional FBI Headquarters building, which he rightly calls a "dead zone in what should be the thriving heart of the city" (Let's Hoover Up a Dead Space on Pennsylvania Avenue).

One quote will give the flavor of the article:

The FBI building, a "brutalist" design constructed in the late 1960s and early '70s, probably suffers from the same conditions that many other buildings of that era do: poor construction and an abysmal layout; highly inefficient use of interior space; and nightmarish heating and cooling systems. The building surely is on the opposite end of today's goals for a "green" space.

By the way, that term "brutalist" isn't just a diss against one building. It refers to a style of modern architecture that was in vogue for a mercifully brief time in the 1960s. Brutalist Architecture originates from the French béton brut, or "raw concrete", a term used by Le Corbusier to describe his choice of material. That style might have had its fans once upon a time, but it has no place amid the neo-classical architecture of the Federal Triangle, the greatest part of the Holy City of Washington. The Hoover Building looks like a pesticide factory compared to the next-door Justice Department headquarters, which outclasses the Hoover Building in every way. There is more architectural merit in one of the Justice Department's art deco doors then there is in the entire Hoover Building.

The Hoover Building is already falling down all by itself, as the author notes ("if you have taken a closer look at the place, then you've seen that the upper part of the building is wrapped in netting. Chunks of concrete facade seem to have fallen off randomly around the exterior"). I say, put it out of its misery and build the FBI a new, secure, headquarters elsewhere.

On the topic of security, allow me to point out the obvious and note that the Hoover Building, which was completed and occupied in 1974, 21 years before the Oklahoma City Murrah Federal Building bombing and the creation of anti-terrorism physical security requirements for domestic government office buildings, is completely vulnerable to a truck-bomb. It has essentially no setback distance from the surrounding streets, therefore no ability to resist blast effects. Part of the structure even overhangs the street (see the above photo). No anti-ram vehicle barrier can mitigate that vulnerability.

This is one situation where both the troglodytes of government security and the sensitive artistes of public architecture should be in complete agreement. The Hoover building must go!
Posted by TSB at 12:32 PM
Labels: FBI