A Public Historian Who Actually Respects the Public 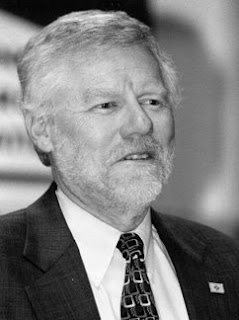 There is a terrific interview with America's foremost public historian ["public," meaning one who practices history for the enlightenment of the general population, rather than for consumption within academic circles] at the Thunderbear web-zine (see: THE LAST WORD---DWIGHT PITCAITHLEY). Parts of it were excerpted by the National Park Service (here: A Historian's Take on the National Park Service), from which Dr. Pitcaithley recently retired as Chief Historian.

Dr. Pitcaithley changed the direction of the NPS from politically safe 'cultural resource management' of our national parks and heritage sites to the more important, but unavoidably contentious, task of historical interpretation. This especially effected how the NPS ran the Civil War battlefields that it inherited from the War Department in the 1930s, where the long-standing memorializing of the South's Lost Cause was increasingly challenged by an interpretation that found the primary cause of the war in the institution of slavery.

NPS today has an admirable record of correcting - gently, and always with respect for all parties - the conspicuous lack of historical legitimacy at many of the nation's most cherished and heavily-visited sites. These include Washington's birthplace, where the 'birth' house that was actually constructed in 1931 has finally been correctly labeled a Memorial House rather than a true replica, and the Lincoln birthplace site, where the log cabin, which is actually the somewhat jumbled remains of a traveling display built 30 years after Lincoln's death, has been re-named the 'symbolic' cabin. The NPS history staff is often in the uncomfortable position of telling the public, including its pressure groups and their Congressional representatives, that some of the things they've 'known' all their lives aren't true.

NPS has a fundamental educational role to play in this country inside parks and outside parks. We require the study of history in our schools to develop a more informed citizenry, so that the decisions we make today are based on some knowledge of how similar issues were handled in the past. The value of historical parks is their infinite capacity to inspire us at places where this experiment in democracy, this journey of participatory government, plays out.

The stories embedded on the landscape of Gettysburg and Manzanar, and Little Bighorn, in the library at Adams NHS, and in the asphalt of the Edmund Pettus Bridge in Selma all provide lessons in courage and determination and hope. They make us proud and they make us sad, and most of all we hope, they make us think about the future of the country and how we as individuals can improve it. Natural parks also contain stories, quoting from the Advisory Board report again, useful to "building a citizenry that is committed to conserving its heritage and its home on earth."

I especially liked this one:

If your question is "is it possible to keep politics out of the interpretation of history by the NPS?" I think the answer is probably a qualified "yes." In my thirty years as a historian in the Service, I never was required, or even asked, to change a message or text for political reasons. When one is interpreting history in the public sector or, as Ed Linenthal describes it, "committing history in public," there will always be those who have a different view of the past and will argue the point. The antidote is a strong understanding of the past based firmly on primary source material. Quoting, in context of course, the voices of the participants of historic events does not leave much room for argument.

Dr. Pitcaithley has an unusual background for an academic, which I'm sure contributes to his notable empathy for his dear, but often mis-educated, fellow citizens. His parents were Vaudeville performers who traveled throughout the country during the Depression. He dropped out of college to join the Marines, and was a forward artillery observer in Vietnam for six months in 1966 until badly wounded during a battle with two North Vietnamese Army regiments. As he relates in the interview, the fact that he could wear a Purple Heart lapel pin helped him to find common ground with the frequently furious Civil War heritage groups who objected to the NPS placing its interpretation of the cause of the war on the sacred ground of battlefields.

I got to know Dr. Pitcaithey slightly when he taught a course in historic preservation at a Washington-area university while working at NPS Headquarters, and I treasure the brief association I had with him. It was clear to me that he is an astute historian, but also, and just as importantly, a man who genuinely likes the American public and assumes the best of them. Would that all my fellow civil servants followed his example.
Posted by TSB at 9:28 AM
Labels: Public History