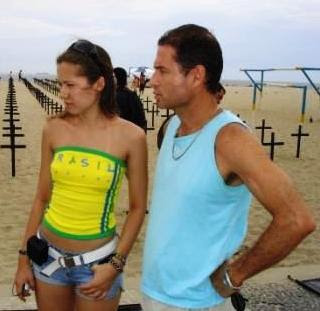 
Gons Nachman packed a lot of experiences into his 42 years of life. He was raised in Costa Rica, emigrated to the U.S. at age 17, went to college and law school, became an activist for the rights of nudists, worked in Miami for the U.S. Immigration and Naturalization Service and in the Congo and Brazil as a Foreign Service Officer, got charged with and plead guilt to possession of (self-produced) pornography, and is now serving a 20-year sentence in a Federal prison.

It's been a long road with many a twist and turn, but fate has finally deposited Gons here, in the Federal Correctional Institution at Petersburg, Virginia.

FYI, you can keep track of Gons' whereabouts for the next decade or two by going to the Federal Bureau of Prisons inmate locator page.

I confess that I find Gons fascinating, in a criminological sort of way. I've met a few sociopaths just like him - some of them also went to prison - and they were all intelligent and charming. I'm sure I would like Gons if I met him. Most people seem to.

You can find some background on Gons and the predatory behavior that landed him in prison here, and here. If you scroll through the comments on those posts you'll find one from a Brazilian visa applicant that he hit on, and a few from others who knew him.
Posted by TSB at 2:02 PM
Labels: Gons Nachman

Right you are; I appreciate the prompt correction.

He misused his position and committed crimes no doubt. But 20 years seems an excessive prison sentence given that federal prisons have no early release.

Every thing that you have made in the post I really appreciate your effort in gathering up the helpful information.theinmatelookup.com