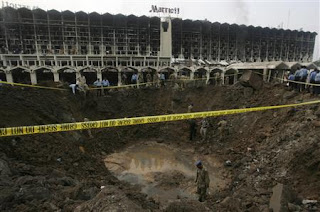 As I write this, I'm still not completely certain that a co-worker of mine, who was returning via Islamabad from a visit to Kabul, was not at the Marriott when the attack took place. So far as I know, he's safe. But two U.S. military members are reportedly among the dead, and one State Department contractor is still missing. It will be another day or two before the casualties are fully known

One thing, however, is perfectly clear right now. Had an explosion of that size happened in front of the hotel, rather than 60 feet away at the entry control point, the building would have collapsed and the fatalities would have been in the several hundreds. The hotel was full at the time: 290 rooms were booked and over 200 people were in the restaurants.

The bomb was huge. The 2,000 pound TNT-equivalent figure is being reported from various sources, but I wouldn't be surprised if the final assessment placed it much higher. A vehicle-borne improvised explosive device (VBIED) that leaves a crater 24 feet deep and 59 feet wide, according to the figures in the Pakistan Interior Ministry's press releases, and breaks windows two miles away, as reported by CNN, could easily turn out be in the 5,000-pound range. That would be about the largest VBIED on record since the 1995 Al-Khobar towers bomb. The bomb was carried in a medium-size dump truck, which could accommodate over 5,000 pounds of payload.

And the only thing that stopped the truck at the hotel's outermost entrance was an anti-ram vehicle barrier (see the video here). Marriott is the industry leader in hotel security at high-threat locations, and it is apparent that they spent the money for genuinely effective vehicle barriers. It isn't entirely clear from the video, but there were two layers of barriers - an outer line of wedge barriers capable of stopping large trucks, and an inner line of light-duty drop bar barricades. Also, and of critical importance, entering vehicles had to go through a chicane approach pattern that forced them to lower their speed; the VBIED had to make a very tight left turn into the vehicle entrance, and it looked to me like it was moving at only 15 to 20 miles per hour when it hit the outer barriers. A truck that size could have over-run even the most robust vehicle barriers if it had been able to get up to higher speed.

This hotel had an intelligently planned and well-funded ring of perimeter security, and that likely averted a death toll that could have gone to 500 victims or even higher.
Posted by TSB at 3:12 PM
Labels: terrorism

I've quoted you and linked to you here: http://consul-at-arms.blogspot.com/2008/09/re-islamabad-mariott-hotel-bombing.html

Good work. I hope your co-worker is okay and mourn the losses of those who died, knowing that it could have, indeed, been much worse...

I appreciate your concern. My co-worker is fine. He's heading back to Islamabad in two weeks, incidentally, to participate in some U.S. embassy responses to the Marriott bombing.