Some Dissenting Opinion On the Nobel Peace Prize 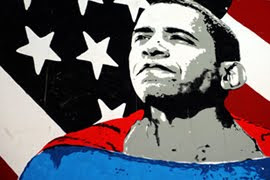 You know that things are getting weird when you can't tell news from parody without checking the original source. This afternoon, I saw a Canadian newspaper report that a Taliban spokesman had denounced the Nobel peace prize committee for its award to Barack Hussein Obama, but there is such an outpouring of jokes today about that award ("Obama wins Eurovision Song Contest" ... "Obama declared winner of Florida 2000 recount" ... "Obama tugs on Superman's cape" ... "Dan Brown announces Obama is the son of Jesus and Mary Magdalene" ... "Obama wins all the gold medals at the 2016 Rio Olympics" and so on and on) that I had to go to alJazeera.net to make sure the story was genuine.

It was. Here are the key quotes:

In Afghanistan, the Taliban mocked the award, saying it was absurd to give it to Obama when he had ordered 21,000 extra troops to Afghanistan this year.

"The Nobel prize for peace? Obama should have won the 'Nobel prize for escalating violence and killing civilians'," Zabihullah Mujahid, a Taliban spokesman, told the Reuters news agency.

In the Middle East, Hamas, which controls the Gaza Strip, was more sceptical. Ismail Haniyeh, Hamas prime minister in Gaza, said: "Unless real and deep-rooted change is made in American policy towards recognising the rights of the Palestinian people, I would think such a prize would be useless."

Liaqat Baluch, a senior leader of the Jamaat-e-Islami, a religious party in Pakistan, said: "It's a joke. How embarrassing for those who awarded it to him because he's done nothing for peace. What change has he brought in Iraq, the Middle East or Afghanistan?"

Most of the on-line reader comments that I browsed through shared the Taliban's sentiments.