Protesters On Our Doorstep 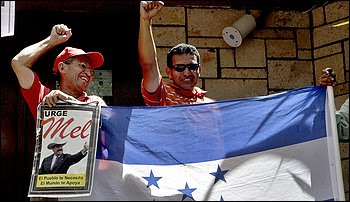 So those supporters of deposed President Zelaya were allowed to conduct their protest right there on the front steps of the U.S. embassy? I hope the embassy's Marine Security Guards were keeping a close eye on them.

Say, that's an awfully strange-looking camera mounted to the wall behind those protesters. Can't the USG afford better security equipment?
Posted by TSB at 4:00 PM
Labels: Department of State, Honduras