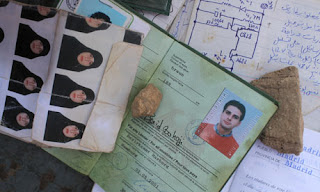 This is a significant find, if it is verified. The UK Guardian, among other news outlets, is reporting that Pakistani troops have discovered passports belonging to al Qaeda figures in a Taliban compound in South Waziristan.

Some quotes from The Guardian's story, Al-Qaida connection: Foreign passports linked to attacks on west recovered:

Pakistani troops sweeping through the mountains of South Waziristan have discovered startling evidence that appears to show a direct link between the lawless tribal belt and al-Qaida attacks in America and Europe.

Last week soldiers raiding Taliban compounds in Shelwasti village, on the edge of the Mehsud tribal territory, recovered a passport in the name of Said Bahaji, a German national accused of being part of the Hamburg cell that coordinated the September 11 2001 attacks.

They also found a Spanish passport in the name of Raquel Burgos García, whose Moroccan husband, Amer Azizi, is accused of playing a role in the Madrid train bombings of 2004.

If authenticated, the documents provide stark proof of what western allies have insisted upon for years, but which Pakistani officials have only recently accepted – that the tribal belt, particularly South and North Waziristan, is the de facto headquarters of al-Qaida, and that Osama bin Laden is most likely hiding there.