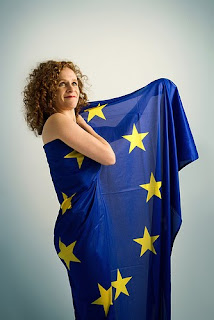 Sophie in 't Veld, wearing the flag of the European Union (photo from Flicker)

The New York Times carried a report yesterday on the rush by European nations to begin using body scanners on air travelers immediately. There seems to be only one official who is calling for a little thinking and reasoning before installing new bells and whistles at every airport gate.

Sophie in ‘t Veld [see her personal and EU web sites], a Dutch member of the European Parliament and an expert on privacy issues, expressed concern that some member states were rushing to use scanners without first allowing for a thoughtful public debate. “These are ad hoc measures, without the governments having any clear idea of what exactly they are trying to achieve,” she said Friday in a telephone interview.

“I understand that the public is clamoring for instant solutions,” Ms. in ‘t Veld said. “Scanners and other technologies can be very useful tools in the fight against terrorism, but they are no more than that.

“Ideally, people with bad intentions should be identified long before” they pass through an airport’s final security checkpoint, she said.

Thank you! Scanners are just that, a tool. Let's please define our security requirements before jumping ahead to the solution.

What is the best assessment of the evolving terrorist threat to aviation, and how vulnerable are various types of aircraft to it? How small an amount of explosive can we realistically expect to find on or about a person, and how best to find it? Is body-scanning 100% of travelers the best use for the next gazillion dollars of public spending? Are we really reducing risk with enhanced passenger screening, or just placating a panicky public?

Until governments can reach consensus on questions such as those they really can't have a "clear idea of what exactly they are trying to achieve."

Sophie in 't Veld is my new hero. I wonder if there is any way I can cast a write-in vote for her?
Posted by TSB at 4:59 PM
Labels: aviation security, body scanners, privacy, Sophie in 't Veld