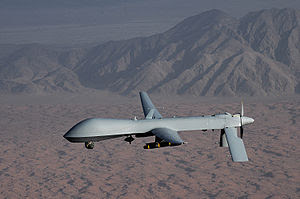 A U.S. Predator drone over North Waziristan was the instrument by which Karma was brought to one of the murderers of Indian heroine Neerja Bhanot, the young woman who was the senior flight purser on the hijacked Pan Am Flight 73 in 1986, according to the Times of India.

From 24 yrs after Pan Am hijack, Neerja Bhanot killer falls to drone:

Half of India's population today wasn't born when she died in 1986 in a hail of gunfire on a hijacked plane after courageously saving scores of passengers, a feat for which she was posthumously awarded the Ashoka Chakra in India, Tamgha-e-Insaniyat in Pakistan and the Justice for Crimes Award in the US. Earlier this week, some 24 years after her heroism, one of her killers died a dog's death in the badlands of Pakistan, reportedly shot to pieces in a US drone attack.

The saga of Neerja Bhanot transfixed India at a time where there was no 24-hour news television and it had little to do with the fact that her father was a New Delhi journalist. She was a flight attendant on Pan Am Flight 73 as it headed out of Mumbai to Karachi en route to Frankfurt and onward to New York City. Four armed men dressed as airport security guards stormed the plane in Karachi. The cabin crew managed to alert the pilots, who decamped, effectively grounding the flight.

In the hours-long ordeal that followed, Neerja showed exemplary courage, attested by some 350 passengers who survived the nightmare, although some 20 died and 120 were wounded after hijackers opened fire on them when Pakistani commandos prepared to storm the plane. Among her acts of courage was her refusal to collect US passports and hiding some of them as the hijackers sought to isolate Americans and Indians. She knew they meant business when one of the hijackers pulled Rajesh Kumar, a 29-year-old Indian American California resident to the front of the aircraft, asked him to kneel at the door, and shot him in the head when their demand for a new flight crew was not met.

Neerja died shielding three children from gunfire as a bloody massacre erupted on the plane. The hijackers, who were said to be from the Abu Nidal Organisation, were eventually captured, tried, convicted, and sentenced to death in 1988. But in a Pakistan that became increasingly permissive about terrorism, the sentences were later commuted to life in prison.

In 2001, Zayd Hassan Abd Al-Latif Masud Al Safarini, the hijacker who shot Rajesh Kumar among others, was captured by the FBI in Bangkok after he was released in Pakistan and was on his way back to Jordan. He was taken to the US where he was sentenced to a 160-year prison term he is now serving in Colorado. Four others who were in Pakistan's Adiala jail were freed in January 2008 even as the US fumed about Islamabad's action. The FBI announced a $5 million bounty on their head, pretty much ensuring their days are numbered.

Earlier this week, Pakistani intelligence officials announced that a January 9 missile strike in the North Waziristan tribal region killed Jamal Saeed Abdul Rahim, one of the hijackers. His affiliation is disputed. The FBI's web site lists him as a Palestinian with possible Lebanese citizenship. The Pakistani officials called him an al-Qaida member, but the FBI site says he was a member of the Abu Nidal Palestinian terrorist group.

There are no doubts about Neerja's affiliation though. She belongs to India's Hall of Courage.

I've heard the concept of Karma defined as 'justice without the satisfaction,' but it sounds to me like the Indians are pretty satisfied with the "dog's death" that was delivered to Jamal Saeed Abdul Rahim.
Posted by TSB at 1:21 PM
Labels: Karma, Neerja Bhanot, Pan Am 73, terrorism