Pakistani Denies Terrorism Charges: "I Don't Have a Beard" 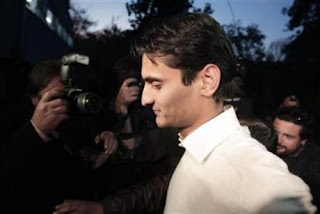 *** Update - My latest news is that the Chilean judge in this case has rejected the prosecutor's request for preventive custody, and has released Mr. Khan pending trial on two counts of illegal association with an indigenous terrorist group and weapons and explosives violations. ***

Last Monday, a Pakistani citizen in Chile was arrested after he entered the U.S. Embassy in Santiago with traces of high explosive on his belongings. Today, he has been charged by local authorities with possession of explosives.

The man, identified by the U.S. State Department as 28-year-old Muhammad Saif-ur-Rehman Khan, was taken into custody at the embassy on Monday and held under an anti-terror law.

Police said traces of the explosive Tetryl were found on Khan's documents and mobile telephone. Tetryl is a compound used as a booster to help detonate explosive charges.

"He has been formally charged for illegal possession of explosives under a weapons control law," a court source said after a closed-door hearing in the capital Santiago.

The presiding judge did not invoke the anti-terror law and it was unclear whether Khan would continue to be detained.

A senior State Department official said on Tuesday that Khan, a student who had been in Chile for four months, was invited to the embassy so officials could notify him that his visa for the United States was being revoked.

The U.S. official, who spoke on condition of anonymity, said he was not aware of any link between Khan and the Pakistani-American accused of trying to bomb New York's Times Square on May 1.

Khan has denied any wrongdoing and instead criticized the United States.

Mr. Khan might not know anything about bombs or terrorists, or even about how he came to have traces of explosives on his cell phone and papers, but he does have his suspicions about why he is in custody.

It might all be the doing of "Mr. Bill from the U.S. Consulate" who, without any explanation, terminated an interview about a routine visa matter and locked Khan up in a room.

Hear the beardless Khan protest his innocence in the video clip below.