That's Not a Wall, It's a Park 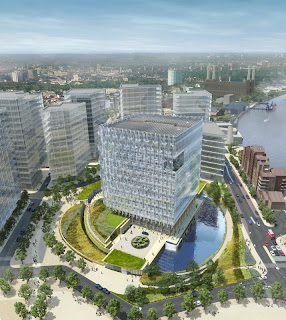 The U.S. State Department has announced that an exhibit on the new London Embassy design officially opened today at the headquarters of the American Institute of Architects in Washington, D.C.

Stephen Kieran and James Timberlake [the project architects] will lead a discussion on the winning scheme at 6:30 pm tonight at the American Institute of Architects. Following the lecture and discussion, the exhibit will be open until 9:00 pm.

The exhibit is open to the public weekdays through June 30th from 9:00 a.m. to 4:00 p.m., weekdays at the American Institute of Architects located 1735 New York Avenue NW, Washington, D.C. Admission is free.

There is more information at the American Institute of Architects (AIA) website.

The embassy is essentially a cube covered in high-tech ETFE plastic that sits on a circular plaza, separating different security planes with landscaping. The embassy is across the Thames, in an area called Nine Elms, a former industrial district that’s been highlighted for redevelopment. One half of the circular site is bisected by a reflecting pool, and the other contains meadows of native American plant species, terraced on several levels to limit pedestrian and vehicular access. The security checkpoint is disguised with a green roof, and all the required setbacks and blast-resistant structural members are in order.

Here's the exhibit, lecture, and discussion in a nutshell. Or rather, in a puzzle:

Boil all this down, and the irreducible design question is one of subterfuge and artful presentation: “When is a wall not a wall?” KieranTimberlake’s answer is, “When it’s a park.”

I like the idea. There is, in fact, a perimeter wall in the London embassy design and it does, in fact, prevent uninspected vehicles from approaching closer than 30 meters as required by State Department security standards and U.S. law. If that perimeter barrier is a circular nested wall and a water feature rather than something overwhelmingly obvious, then so much the better.

Evidence of this fact [that embassies are "bound in symbolic communication"] is apparent in the transition from the State Department’s previous Standard Embassy Design (SED) program to its new commitment to build embassies through a GSA-inspired Design Excellence program. The SED program began as a response to the 1998 terrorist bombings of U.S. embassies in East Africa, and was meant to raise the level of security at diplomatic facilities. It succeeded at this goal, but the products of the SED program were often isolated, fortress-like compounds on exurban sites designed with static templates that didn’t reflect the context of their environment. With the help of an AIA report on embassy design issued last year, the State Department has pledged to find ways to balance the need for security and quality design in each of its projects.

I'm sure the Office of Overseas Buildings Operations (OBO) will be pleased to learn that it has transitioned from its "previous" Standard Embassy Design program. Actually, I think that program continues, but I can't blame the AIA for trying to abolish it.
Posted by TSB at 10:23 AM
Labels: Department of State, Design Excellence, Fortress Embassy, Standard Embassy Design