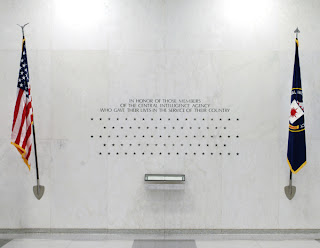 The CIA has revealed the identities of 15 of its fallen officers, some of whose secret ties to the spy agency are being made public for the first time in almost three decades.

Engraved on a memorial wall at the CIA's headquarters building in Northern Virginia are 103 stars, each representing a CIA officer who perished in the line of duty since the agency's founding in 1947. For some, the star is all recognition they have - many names have still not been made public out of concern for secret operations.

Some of the individuals whose service as CIA officers was publicly confirmed today have been the object of speculation in the past as having worked for the spy agency.

For example, Matthew K. Gannon died in the 1998 bombing of Pan Am Flight 103 over Lockerbie, Scotland. Officially listed as a Foreign Service Officer for the State Department, Gannon's links to the CIA appeared in press reports at the time of the crash. However, the agency never officially confirmed that he was a CIA officer until this week.


I have more about the Pan Am 103 bombing, Matthew Gannon, and Diplomatic Security here.

The Congressional Record of March 14, 1989, included the eulogy delivered at Gannon's funeral by Assistant Secretary for Diplomatic Security Robert Lamb. It begins:

"For the 1,400 men and women of the Bureau of Diplomatic Security, this is a day of sadness and of irony. The Bureau was born out of our nation's commitment to protect all of the people who would do our nation's work abroad. It is a world in which DS has made a difference. It touches us deeply, therefore, to gather here today to mourn the lives of young men who dedicated their lives to protecting others."