Diplomatic Courier Gets Some Recognition 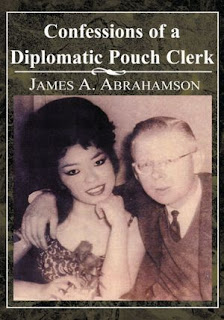 (The above photo has nothing to do with this post; I just like that Old School image of a diplomatic courier. Do you suppose that guy took visiting Secret Service agents to the hottest night spots in 1950s Manila?)

I didn't notice this when it first appeared in the WaPo last week, but here is a nice tribute to a new Diplomatic Courier, a young woman named Shane Morris.

Shane Morris played a crucial behind-the-scenes role for the State Department during the Arab Spring uprisings in 2011, ensuring that U.S. embassies were able to dispatch and receive critical classified documents and equipment to fully carry out their diplomatic missions.

As a new supervisor with the State Department’s Diplomatic Courier Service, Morris faced a crisis situation shortly after assuming her post last year, when normal routes for delivering and retrieving important diplomatic pouches were disrupted because of violence in the Middle East. This created the potential for opening security holes in diplomatic communications and endangering American personnel.

“In the Middle East and North Africa during the Arab Spring, we confronted the threat of U.S. diplomatic missions being overrun by protesters and classified materials being compromised,” said Jim Angell, a regional diplomatic courier officer. “Through her creative use of transportation routes, Shane extracted all classified materials from these hotspots to ensure they remained secure.”

Morris also found “workarounds” that allowed couriers to deliver materials securely to the U.S. embassies in other hotspots.

For example, she was confronted with a backlog of sensitive materials at the U.S. embassy in Yemen due to the difficulty in obtaining flights to the region and obstacles put in place by the Yemeni government. There was ongoing civil unrest throughout the country and large-scale protests and violent clashes in major cities.

When a flight became available through Rome, Morris ... was able to clear the entire backlog of classified material from Yemen in one flight, just as the U.S. embassy there began discussing the possibility of evacuating personnel because of the escalating violence.

It is unusual for employees as young as Morris to begin working with the Diplomatic Courier Service because they tend not to have the required experience, according to her colleagues. But Morris, who speaks three languages in addition to English, had gone to school in Canada, traveled in South America, worked in Thailand and volunteered at the Mother Theresa Orphanage in India, proved to be an exception.

“You really need to be able to think on your feet and make the best of any situation,” Morris said. “Working with what you have at hand is really what keeps it so interesting.”

TSB: That's a great photo! Once again the value of knowing the language of the people you have to deal with comes front and center. I feel sorry for Ryan Crocker's health. Serving a failed foreign policy all those years with people who don't know the language surely takes it's toll! gwb