"I'm TSB And I Approved This Message" 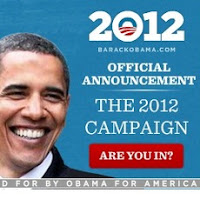 President Obama is dropping in on Columbus, Ohio, and Richmond, Virginia, today in what are his first acknowledged political campaign events of 2012. See his schedule for today here.

I'm relieved to see this, because the pretense of 'I'm holding rallies in key campaign states in order to do government business stuff that has no relation to my reelection campaign' has worn clean through.

It's enough to make a liberal WaPo columnist get absolutely cranky about President Obama, campaigner in chief:

In a political culture that long ago surrendered to the permanent campaign, Obama has managed to take things to a whole new level. According to statistics compiled for a book to be published this summer, the president has already set a record for total first-term fundraisers — 191 — and that’s only through March 6. Measured in terms of events that benefit his reelection bid, Obama’s total (inflated in part by relaxed fundraising rules) exceeds the combined total of George W. Bush, Bill Clinton, George H.W. Bush, Ronald Reagan and Jimmy Carter.

It’s not just the gatherings officially categorized as campaign events. To a greater extent than his predecessors, Obama has used the trappings of his office to promote his reelection prospects even while handling taxpayer-funded business.

The election is still six months away, but it’s increasingly difficult to distinguish Obama’s political events and speeches from the official ones.


Six more months of campaigning to come. It makes me tired to even think about that.
Posted by TSB at 10:33 AM

TSB: I think the next event worth watching will be when he arrives at the convention in that armored bus.Or have they already scrapped that thing? gwb

Oh, I am positive we'll see the armored bus over the next six months. You'll know it when you see it because it is prohibited to put partisan signs or logos, etc., on that government-owned vehicle. If you see Obama or Romney getting out of a plain-wrap black bus, know that some of your taxes went to paying the multi-million price of that bad boy.