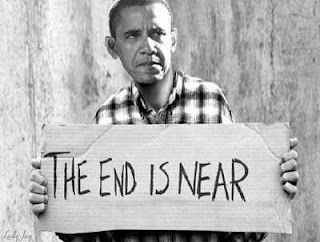 Obama's fundraising appeals went off the deep end again today. Obama wonders: is this ‘the end?’

“It’s August 23rd,” Obama wrote in a fundraising email with “the end?” as its subject line. “And 75 days from now, I’ll either be looking at another four years in the White House — or the end of this opportunity.”

He asked for contributions of $5 or more, saying “we’re getting outspent by wide margins in critical battleground states — and what we do about that today could be the difference between winning and losing on November 6th.”

Yes, in the silly season that hits Washington every fourth year this qualifies as The End.

How did I miss that you had a new Twitter home?!?!

I am all over that like white on rice...

Desperation is evident in the Obama camp! I think they should abandon the emails and appeal directly to DEM golfers to Please put a mayonnaise jar on the clubhouse counter for Labor Day Weekend for those $5 bills. Tell everyone that each $5 will create one new job. "Operation Grass Roots" gwb

A job for only 5 bucks? What a deal! Where can I donate?